Barça kick off a series of pre-season friendlies with a match against Valerenga in Oslo on Thursday evening. Norwegian football is largely an unknown quantity for the Club.

Although this won’t be the first time Barça have come up against a Norwegian team, previous matches have been few and far between. There was a Cup Winners Cup quarterfinal against Lyn Oslo in 1968 and a Champions League clash with Viking Stavanger in 1992. Barça won both games.

In 1968, Barça were drawn against the then Norwegian champions Lyn Oslo in the Cup Winners Cup. Barça won the home leg 3-2 with goals from Zaldúa, Rifé and Pellicer. Both Norwegian goals were scored by Harald Berg.

The return leg ended in a 2-2 draw. Curiously enough it was also played in the Camp Nou due to the presence of snow on the pitch of the Ulleeval stadium in Oslo. However, Lyn almost pulled off a shock result –with only 15 minutes left of the match they were winning 2-0 and only two late goals from Pellicer and Gallego saved the day for Barça. 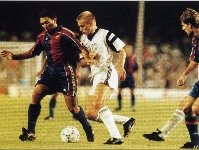 The Barça side managed by Cruyff met Viking Stavanger in the R32 of the Champions League in 1992. The team was in poor form and only a late Amor goal (min.87) prevented what would have been an embarrassing defeat.

A goalless draw in the return leg against a very defensive Viking side sent Barça through to the next round.

This Thursday, Barça will face Norwegian opposition for the third time. Valerenga will be no pushover – they are currently second in the Norwegian National League.

First test of the pre-season

This match will be the first test ahead of the tour of Asia from 1st to 9th August. Barça will have matches against a K-League All-stars team (Wednesday, 4th August) and Guoan (Sunday, 8th August) in Beijing. The squad will then return to Barcelona on 9th August to prepare the Spanish Super Cup against Sevilla.