“The squad is perfect”

“The squad is perfect”

Víctor Valdés, one of Barca’s eight World Cup winners, is enjoying a well deserved break, but he was in Gava on Monday at an event to celebrate his achievements and afterwards he spoke to Barca TV.

Valdes reckons Barca are going into the next season with a great squad and although he’s enjoying his holidays, he’s keen to get back to work with his teammates.

Although he’s naturally enough been focussed on other things this summer and it’s been a while since he’s been to the Nou Camp, Valdes has been keeping a close eye on the comings and goings at the club and reckons: “with Villa and Adriano, the squad is perfect. They were important players at their old clubs and I’m sure they will be here too. They are very positive signings and the decision to bring them in was great. I’m sure they will show that on the pitch for us”.

Valdés also believes the team will be even more ambitious this season, despite their success over the last couple of seasons: “we are even keener to win things now. We are a young team and the secret is that we have so much ambition to keep going forward. What’s more, the new signings bring ambition and a desire to win titles with the club”

The Champions League Final will be held at Wembley next year and according to Valdes, being there and winning another European title is the main aim of the squad: “it’d be great to be able to get there and put last year’s events behind us. We want to win all the competitions we are involved in, but especially the Champions League. We want to enjoy again the great atmosphere when you win that title”. Maybe there’s still one piece in the jigsaw missing to ensure that success – Cesc, and Valdes is clear how much the young Catalan could bring to the team: “he’s a great lad and we get on really well. He’s a marvellous player and he would certainly fit in with the team. I’d love him to come home and I know he’s hoping to. Everybody knows he wants to and he’s excited about the chance. The fans are waiting for him”.

Keen to get back to work 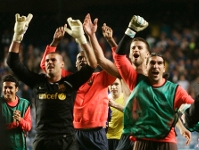 Valdés won’t be back in training until August 9th, just after the end of the Asia Tour and although it’s only been just over a fortnight since the World Cup Final, he is keen to get back into the swing of things at the Nou Camp: “when I see the lads on TV training, I really want to come back, but there is a date set and I have to respect that”, he jokes, “no really, it is important to rest after the work I did with the national team. The body needs the rest”. 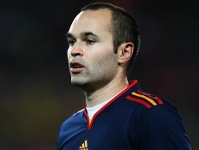 Víctor Valdés has won it all with Barca but he insists that the World Cup medal this summer: “is something very special. To be the World Champions is the most important thing in any sport and I feel privileged to have won the title and to have been part of such a great group”. Iniesta’s winning goal against Holland was especially important for Victor because of his friendship with the Barca midfielder and he explained: “I ran out of the dug out to hug him at the final whistle – I just couldn’t help myself – it was as if I’d scored it myself”. 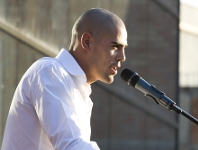 Víctor Valdés was born in Hospitalet in 1982, but he’s always lived in Gava with his family and for that reason the Gava Town Council organised the event to celebrate his winning the World Cup. Valdes’ family came to the city in the post war period, like many immigrants from the rest of Spain, and his grandfather Josep, who had moved from the town of Zamora in Castilla-Leon in 1948, was Gava’s first ever taxi driver.