Second week of training kicks off

Second week of training kicks off

The second week of training got underway on Monday morning with the same group of players as last week. There’ll be a second session this evening which will include Eric Abidal.

The players were back in training on Monday after a break of just a day and a half. There’ll also be a second session this evening. A total of 27 players were involved including 10 from the senior squad (Pinto, Maxwell, Milito, Adriano, Victor Sanchez, Keita, Hleb, Bojan, Ibrahimovic and Jeffren) and 17 from the reserves (Oier, Mińo, Masip, Dalmau, Sergi Gomez, Armando, Muniesa, Riverola, Ilie, Sergi Roberto, Tello, Benja, Jonathan Soriano, Nolito, Cuenca, Jonathan dos Santos and Edu Oriol).

Meanwhile, Andreu Fontŕs and Victor Vazquez continued their recovery work in the gym. 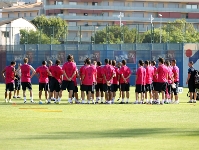 Eric Abidal is the first member of the Barca squad who took part in the World Cup to return to training – though this morning he had the usual pre-season medical and will join the rest of the group this afternoon.

The session followed the same pattern as last week with warm-ups, ball control work and circuit training. The focus will now be on the first friendly of the summer on Thursday against Valerenga in Oslo.

This evening’s session will start at 7 pm. 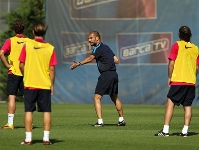 There will be another double training session on Tuesday – the last double session of the week. The players will travel to Norway on Thursday and then take off on the tour of Asia on Sunday.