Far from being tired of winning just about every title in the game, the Barça players are motivated and hungry to collect more honours. Sergio Busquets told Barça TV that they are now more ambitious than ever.

“I promise we’ll carry on winning” said Sergio Busquets, in contrast to those who suspect that after two such glorious years, Barça may be lacking ambition. The midfielder is extremely optimistic about the season that is about to commence. 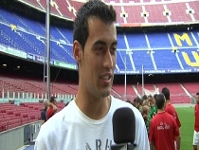 Busquets has won seven titles for Barça and the World Cup with Spain, but all he wants is more. ”If this group is noted for any one thing, then it’s the desire to win and for having so much ambition. We are highly motivated, just the same or even more than we were last year” he says 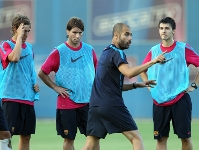 Busquets knows that if anybody lets their head drop, then there is one man who will put them back in their place. “I am sure Guardiola won’t allow us to relax. If we don’t win titles this year, it won’t be because of any lack of ambition”. 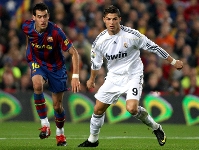 The fight for the Liga title has, for the last two seasons, boiled down to a head to head between Barça and Real Madrid. Busquets hopes things will be more open this season. “For the good of football, it would be good if it wasn’t a two-horse race. Barça and Real Madrid are certainly the best two teams in the league both in terms of budget and the quality of their squads, but it would be much better for it to be more competitive”. 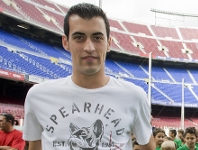