Adriano links up with Alves and Keita again

Adriano links up with Alves and Keita again

Adriano will again link up with two ex-Seville teammates this season: Dani Alves and Seydou Keita.

Barca’s new Brazilian signing will have a couple of ex-teammates to help him settle into the squad: Alves and Keita. 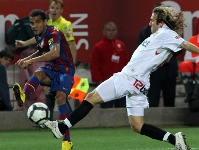 The two Brazilian full backs played together for four years at Seville, where they forged a great friendship. Adriano took Alves as an example to follow and together they won a Spanish Cup, two UEFA Cups, a Spanish Super Cup and a European Super Cup.

One season with Keita 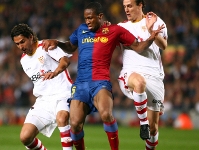 Keita was Adriano’s teammate for just a single season – the Brazilian’s first at Seville and the Mali player’s last before he joined Barca in 2008Amb Keita. Unfortunately, Adriano and Keita never won a title playing together at Seville. 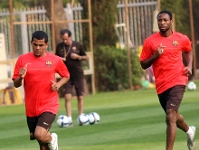 Alves and Adriano for Brazil

Alves and Adriano had played together before they starred in Seville, with both forming a part of the Brazilian under 20 team which beat Spain, for whom Andres Iniesta starred, in the 2003 World Cup Final – their first title won together.