Guardiola signs for another year

Guardiola signs for another year

Josep Guardiola officially secured his future at FC Barcelona on Wednesday when he signed for another season as coach of the first team along with assistant Tito Vilanova.

The deal was announced earlier in the week by spokesman Toni Freixa and now the trainer has put pen-to-paper on a new contract that will keep him at Camp Nou until June 30, 2011. 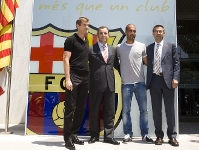 At 13:30 president Sandro Rosell and sporting vice-president Josep Maria Bartomeu met Guardiola, his agent Josep Maria Orobitg, and Vilanova in the club's offices. The coach stated back in January that he planned to stay at Barça for at least another season and has kept his word. 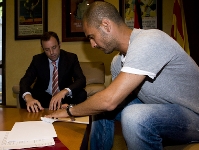 Guardiola has won seven trophies in his first two seasons in charge after he added four pieces of silverware last term to the treble which he secured in his first campaign at the helm.

Success with Barça B 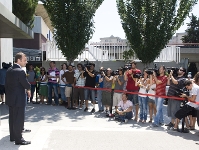 It will be Guardiola's third season in charge of the first-team, but he also spent one year coaching Barça B with great success as he led the youth side back to La Segunda B after they spent just one term in the fourth tier. 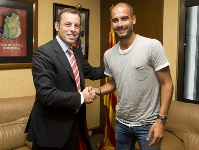