Players’ joke on Cesc during celebrations

Players’ joke on Cesc during celebrations

During the Spanish team’s celebrations on their return to Madrid, Puyol and Piqué put a Barca shirt on Fabregas – one of the more significant anecdotes of a night in which more than a million people came out onto the streets of Madrid.

The players were driven through the city in an open top bus to the Puerta del Rey where at 23.00, thousands of people were waiting to see their heroes and the much longed for trophy.

After coach Vicente del Bosque, captain Iker Casillas and goal scoring hero Andrés Iniesta had spoken to the crowds, ex-Barca keeper Pepe Reina took the microphone and acting as master of ceremonies, presented all the 23 players to the fans. When it was Cesc’s turn, Puyol and Pique ran after the Arsenal player and put a Barca shirt on him.

The trick played on him by the two Barca men will only intensify the already feverish speculation about Cesc’s possible signing for Barca this summer. Reina added to the atmosphere by presenting Cesc as “the future of Barca and the future of the Spanish team”.

Cesc, Piqué and Puyol, as well as Xavi and Valdés all exhibited the Catalan flag at various moments during the celebration. 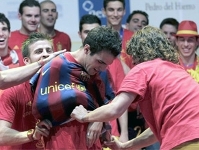