Iniesta: “This is the best day of our lives”

Iniesta: “This is the best day of our lives”

Barca’s Spanish World Cup winners were naturally enough, thrilled by their win over Holland when they spoke to the press after the game.

“My goal is a goal by the team and everyone who made it possible. I picked up the pass and knew I had to cut inside and I just hit it as hard as I could. This is for all my teammates – it’s the best day of our lives. This is unrepeatable”.

Iniesta also explained why he’d dedicated the goal to the ex-Espanyol captain Dani Jarque, who died in Italy last year: “it was the best time to remember him. It was a gesture I’d been wanting to make for a while and now was the time”. The goal scorer also had words for his family: “they’ve always been by my side during what has been a difficult year for me”. 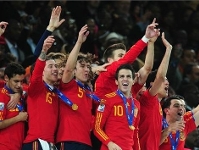 “I’m immensely happy for us all, but especially for all the fans we’ve made happy tonight. This is the best title a player can ever win”.

“It’s the best thing that’s ever happened to me as a footballer. I’m so happy and I want to thank everyone who’s been supporting us at home and here in South Africa. We really felt their support”.

“I want to dedicate this win to all my friends who weren’t able to make it here and to my parents. What we’ve done still hasn’t sunk in yet “. Reflecting on the game itself, Busquets insisted: “we were the better team”.

“It’s an unforgettable night and it’ll be hard to come back down to reality after this! I’m very happy for myself and all the fans in the Canary Islands and in Barcelona. I didn’t have a very good game tonight, but I think the team were better as a whole than the Dutch”. Pedro spoke to the media wrapped in a giant Canary Island flag. 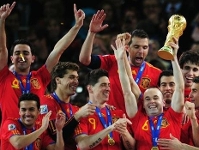 During the post match celebrations, David Villa put on a scarf of his hometown club Tuilla, whilst Sergio Busquets wore a scarf of his local team in Badia del Valles.