Bojan: "I have shown I can be a regular”

Bojan: "I have shown I can be a regular”

Despite being only just 20 years of age Bojan Krkic already has plenty of first-team experience and he is looking forward to playing even more often in the new season.

The Linyola-born striker is confident that he can improve on his form and earn a more regular place in Pep Guardiola's team having already shown what is capable of.

After the great end you had to last season are you looking forward to the start of pre-season?

"Yes, I really am. Those games were very important for me because I had time and confidence and things went well for me. I want to start and ensure that things continue along the same lines."

You scored a great goal against Villarreal during that run. Was that the best you have ever scored? 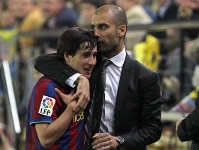 "It was a very good goal and a very special game for me. After we were knocked out of the Champions League by Inter it was vital that we responded in the right way and the fact we could pleased me. Doing that was because I had confidence after being given more minutes."

Will next season be your chance to break into the starting side regularly?

"I hope that I can continue on from last term. I finished up by being the starting team and showed that I can be helpful."

The last two seasons have been historic in terms of trophies won and the level of play. What can we hope for next term?

"They have been two years when the level has been very high and we know that even more will be asked of us. What we have to do to is to maintain things, especially the unity that we have out on the pitch and with the spirit that there is in the dressing room. On the field we have to work hard as hard as we have done until now and be sure that the fans are behind us."

There have been changes to the youth system at the club. What do you think? 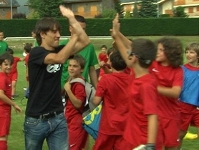 "They are positive changes because i think that former players that came through the ranks have taken up new roles there. Who better to understand that world and the philosophy of the club? I am delighted for Guillermo Amor, who I know, and I am sure that between them all things will go well."

You came from La Masia so you should be delighted with Barça Atlčtic's promotion.

"Yes, I am. It is great that a club that has promoted so many youth team players like Barça have can have their second team in la Segunda A. It seems incredible. I am very pleased for the player because I played with a lot of them and they are my friends. I have talked to them and they are pleased."

The World Cup has dominated the summer. What do you think about so many of your Barça team-mates reaching the final? 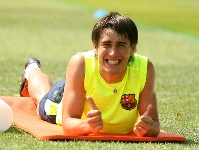 "I am delighted for the players I know because they deserve it. Especially [Carles] Puyol with his magnificent goal. The final will be a toss up and I hope that they can win it because it would be great for them."

When Puyol scored against Germany did you think about his goal in the 2-6 win against Real Madrid?

"Yes, the two goals were very similar. It was an identical move with the same two players. It was great."

What is your prediction for the final?

"I am going for another 0-1, like the games have been up to now. I think that will be enough." 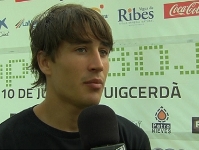 Bojan Krkic spoke to www.fcbarcelona.cat when visiting the first Campus Bojan in Puigcerdŕ. No less than 156 children aged between seven and 14 are enjoying the school between July 4 and 11 under the guidance of Sergio Lobrera.