The eight FC Barcelona in South Africa with the Spanish national team join an illustrious list of stars from the club to have been a part of a World Cup Final.

Víctor Valdés, Carles Puyol, Gerard Piqué, Sergio Busquets, Pedro, Andrés Iniesta, Xavi and David Villa are all on the verge of international glory, but just by being part of the squad for the encounter against the Netherlands this weekend they are writing their names in the Blaugrana history books. 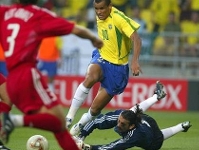 In 1998 and 2002 Barça were represented in the World Cup Final as Rivaldo played for Brazil against France and then Germany. Despite losing 3-0 to the French in Paris 12 years ago, the Camp Nou favourite won the famous gold trophy next time around as he helped his country to beat the Germans in in Japan. Rivaldo is still the only FC Barcelona to have played in back-to-back finals. 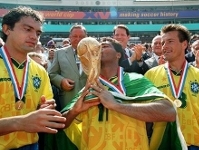 Romario also played in the World Cup Final for Brazil whilst on Barça's books and he too won the trophy as the South American side defeated Italy in a penalty shoot-out at the tournament in the United States in 1994. The striker was chosen as the competition's best player as he netted five goals.

The first players to appear in a World Cup Final while playing for Barça were the Dutch duo of Johan Cruyff and Johan Neeskens. Both players appeared for the Netherlands in the 1974 final against West Germany in Berlin, but could not help their country to victory as they were beaten 2-1 by the hosts.

Four years later Neeskens again helped the Oranje reach the final, but once again he was on the wrong end of a 2-1 scoreline as the host nation Argentina won the trophy. 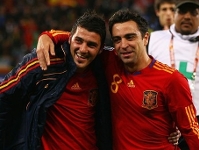 A number of other players have played in the World Cup Final either before or after playing for FC Barcelona. Gianluca Zambrotta won the World Cup in 2006 before joining Barça while Éric Abidal was a runner-up in the same final with France. Ronaldinho, Ronaldo, Edmílson and Juliano Belletti all appeared for Brazil in 2002 while Thierry Henry, Lilian Thuram, Laurent Blanc, Christoph Dugarry and Emmanuel Petit played for France four years before. In 1986 Diego Maradona led Argentina to glory, while Hungarian duo Zoltán Czibor and Sándor Kocsis both represented their country in the 1954 final. The first player to achieve the feat and be linked with Barça was the 1930 finalist Héctor Scarone who played for Uruguay four years after having appeared for the Blaugrana.