Holland, a finalist with a Barēa flavour

Holland, a finalist with a Barēa flavour

There’s a definite Barēa flavour to World Cup finalist Holland. On the playing side there are two former Barēa stars, Gio van Bronckhorst and Van Bommel, plus Frank de Boer and Phillip Cocu on the coaching staff. 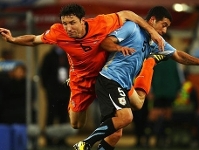 For Barēa fans the current Holland squad will bring back some happy memories of the Champions League final in Paris in 2006. Van Bronckhorst and Van Bommel both took part in that match and on Tuesday, Giovanni van Bronckhorst opened the scoring in the first semi-final against Uruguay with a 35-yard thunderbolt that could well end up as one of the goals of the tournament. Van Bronckhorst has already announced that he’ll be retiring at the end of the competition.

Sneijder and Robben make it three 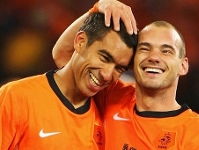 Atletico Madrid’s Diego Forlįn equalized for Uruguay in similar fashion and the match was evenly balanced until Wesley Sneijder put the Dutch side ahead again – with Van Persie possibly offside. Robben made it 3-1 before Maxi Pereira pulled one back for the South Americans in injury time. However, it was too late to stop Holland reaching their third ever World Cup final.

Coaches with a Barēa past 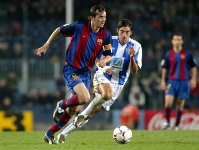 Former Barēa players Van Bronckhorst and Van Bommel are regulars in the starting line-ups of Dutch coach Bert Van Marwijk. Meanwhile, sitting next to Van Marwijk on the coaches’ bench are two more with a Barēa past, Frank de Boer and Phillip Cocu. 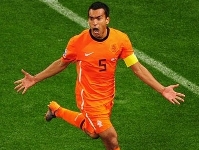 Uruguayan Martin Cįceres, who is still officially a Barēa player, played his first game of the tournament against Holland due to the absence of first-choice left back Fucile. He was charged with stopping Robben. He saw a yellow card for dangerous play in the first half.

Cįceres, who was on loan to Juventus last season, is still a Barēa player although the Club’s coaching staff will not be including him in the squad for next season.