Ronaldinho returns for the Gamper

Ronaldinho returns for the Gamper

Two and a half years after he left the club, Ronaldinho will be back in the Camp Nou with AC Milan for the 45th Joan Gamper Trophy.

Ronaldinho Gaucho defended the Barca colours for five seasons from 2003 to 20008 and established himself as one of the greatest stars of Frank Rijkaard’s team. His permanent smile and huge footballing talent endeared him to the fans and helped put Barca well and truly at the centre of the European footballing stage. He scored his final Barca goal on 3rd March 2008 in the Vicente Calderón and then a week later he played his last game against Villarreal in the Camp Nou. 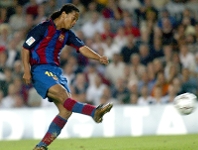 Barca fans will long remember his very first goal for the Club for two very good reasons. Firstly, it was a fantastic goal. And secondly, he scored it in the middle of the night!! On a hot September night in 2003, in a match against Sevilla that kicked off at 12:05, Ronaldinho almost broke the back of the net with the power of his shot. The Brazilian had presented his calling card.

But this was just the first page in a long story full of amazing football and successes. For example, there’s the 0-3 defeat of Real Madrid in the Bernabeu in the 2005/06 season. He scored two goals of such skill and beauty that even the local fans had to give him their grudging applause.

A great goal against Milan 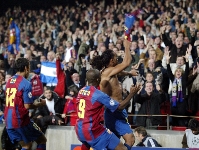 However, now that Ronaldinho is coming up to his third season with AC Milan, he won’t forget his first two visits to the San Siro in a Barca shirt. The first visit in October 2004 ended in defeat but a fortnight later he scored a tremendous goal in the last minute of the match.

The following season, the two teams met up again on the road to the Champions League final in Paris. Ronaldinho didn’t score in the first leg but his contribution was vital, providing the incredible assist for Giuly to score. The goalless draw in the return leg made this pass and goal even more important. The two sides also went head to head in the Joan Gamper Trophy in 2004 but Ronaldinho missed out on the 2-1 victory (goals from Giuly and Iniesta) due to injury. 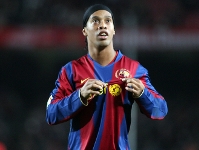