The vice president for sport, Josep Maria Bartomeu, has said that the Board is working on their contract with Pep Guardiola, who should sign when he returns from South Africa.

Now officially in their positions, the team led by Sandro Rosell would like it if Pep Guardiola and Tito Vilanova were to stay at the club. First though, they will need to hold meetings with both coaches. Two days ago, the Board met Guardiola’s representative, Josep Maria Orobitg.

The first contacts suggest optimism, according to Bartomeu, and only minor details need resolving. But Pep Guardiola is currently doing promotional work in South Africa, and the details of his new contract would not be decided until his return.

Josep Maria Bartomeu also answered questions about new signings. He would not say how many new names were being targeted, saying that such information could only be disclosed by the new technical director Andoni Zubizarreta- but he did say that the Board was interested in “resuming the wise negotiations of the previous board ".

So the name of Arsenal man Cesc came up among those present, and also in Sandro Rosell’s conference. He said they would like to secure the Catalan midfielder, but the president made it clear that "we won’t pay anything other than the right price. We’re not going to go crazy on this issue ". 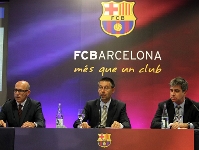 Valencia’s Juan Mata was also mentioned, who is also being rumoured as a possible inclusion. The vice president made himself clear on this point. “We have not even made any negotiations to sign him”. Besides, he said, the player has already denied the rumours of any supposed agreement.

As for Thierry Henry, the club said it will honour the agreement originally made with the Frenchman, whereby he will be free to choose whatever club he goes to.

The board has also decided that none of the loaned out players, Henrique, Hleb, Cáceres and Keirrison, form part of Pep Guardiola’s plans and the club is ready to loan them to whoever makes the best offer. These negotiations have already commenced.

He also said that José Ramon Alexanko’s contract has been terminated. Until now, he was in charge of the Barça youth system. 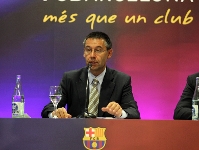 Apart from Guardiola, the club is also looking to settle terms with the other members of the FC Barcelona coaching staff. The board is looking at arranging medium term settlements of about three years with each.

Bartomeu also said that they would like the club’s emblematic players, such as Migueli, Rexach and Fusté, to be involved in representing the club institutionally.