The South Africa 2010 adventure is over for FC Barcelona’s Dani Alves. Losing 1-0 at half time, Holland produced unexpected brilliance in the second half and sent Brazil crashing out of the tournament.

Alves may have started the tournament on the bench, but he earned himself a place in Dunga’s starting line-up thanks to some terrific performances in the unfamiliar position of right midfielder, playing just in front of Maicon. He played the full ninety against Holland in today’s quarter final in Port Elizabeth, and especially in the second half, when Brazil started floundering, it was the Barça man who did the most to keep his team afloat.

But at the end of the day, it was two former Barcelona players, Giovanni Van Bronckhorst and Mark van Bommel, who had smiles on their faces. Yet at half time it had looked like the South Americans were going to cruise it. 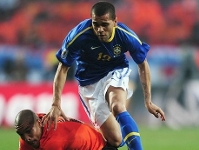 The leaks had already been exposed in Holland’s back four in the opening minutes when Robinho was denied a goal by the offside flag, but the same man was on target shortly after when he expertly converted Felipe Melo’s pinpoint pass from midfield. By half time, Holland were against the ropes in what was proving to be one of the games of the tournament, and had it not been for goalkeeper Maarten Stekelenburg, they could have been much more than a single goal down. 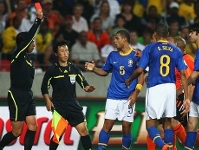 We had were very few signs of what would be a historic comeback in the second half. But Holland came back out with renewed vigour, and produced an equaliser when Felipe Melo nodded a Wesley Sneijder cross into his own net. That was in the 53rd minute, and twelve minutes later Sneijder was there to head home a corner and make it 2-1.

All Brazil’s good work in the first half had come to nothing, and their desperate scramble to get back into the game was not helped by Felipe Melo shockingly stamping on Robben and being rightly red-carded for his sins. As Brazil threw everything into attack, Holland retaliated with some dangerous counter attacks. Here, they could easily have sentenced the game but squandered several simple opportunities.

Game over for Brazil

However, Brazil failed to reproduce any of their first half magic and their World Cup challenge faded to nothing. Holland, meanwhile, may have lacked spark in this World Cup so far, but what we saw in the last 45 minutes against Brazil today has seen the Oranje suddenly up there among the favourites to win the trophy.

So, it all ended in bitter disappointment for Dani Alves. Nevertheless, he can take heart from the fact that he was one of the most impressive components of a Brazil team that seemed to be getting everything right until those fateful last 45 minutes against Holland. 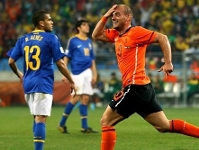