Toure Yaya has left FC Barcelona. The club has sold him to English side Manchester City for 30 million euros plus variables of 0.5 million euros depending on whether City qualify for the Champions League.

Of these 30 million, 24 will go to FC Barcelona and six go to Toure’s agent, who holds the economic rights to the player, as explained to a press conference by the vice president for the sports area, Josep Maria Bartomeu.

The Ivorian to ever play for Barcelona arrived at the Camp Nou on June 26, 2007 as the second signing for the 2007/08 season. He signed for four seasons, and his contract was later extended until 2012. He now leaves for Manchester City, where he will be teaming up with his brother, Kolo Touré. 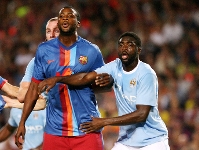