Touré Yaya, one of the lynchpins of the treble-winning team, is leaving Barca after three seasons marked by his commitment and versatility.

The first player from the Ivory Coast to defend the Barca colours has left a deep impression on the Club. In three seasons, (2007-10), Touré Yaya was one of the mainstays of perhaps the greatest team in the history of the Club, a team which won two league titles, the Champions League, the Spanish Cup, the World Club Cup, the European Super Cup and the Spanish Super Cup. During his time at the Club he played most of the time in central midfield but he also adapted to a more defensive role, even playing in the heart of the back line. His physical presence and technical skills made him a vital player both in defence and in attack.

Touré moved to Barca from Monaco in the summer of 2007. Although he was still only 24 at the time it was his fifth European Club and he quickly settled into the team. The injury he picked up early in the season together with a long absence at the Africa Cup of Nations interrupted his progress, especially when he came back from the African tournament nursing a back problem. However, he carried on playing at a high standard and delayed the operation until the end of the season.

Under Frank Rijkaard, he played 38 matches (26 in the league, 3 in the Cup and 9 in the Champions League) and scored two goals. 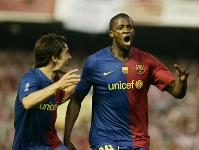 The arrival of Pep Guardiola confirmed and reinforced the importance of Touré Yaya to the team and he was a basic element in the treble-winning team, playing 43 matches (25 in the league, 6 in the Cup and 12 in the Champions League). His commitment and work rate on the pitch endeared him to the hearts of Barca fans and the fantastic equalizer he scored against Bilbao in the Cup final will long be remembered as will the epic duel he fought out with his Ivory Coast team-mate, Didier Drogba in the semi-final of the Champions League at Stamford Bridge. In the final, he forged an impeccable partnership with Piqué in the heart of a defence almost decimated by injury and suspension. 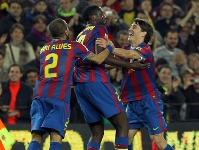 In his third season, he remained a vital player for the team despite the interruption of the African Cup of Nations and fierce competition for a midfield place from a home-grown rising star called Sergio Busquets. He played in 37 matches and picked up another league winners medal. He adapted when needed to a more defensive role in front of the back two and, indeed, played his final game for the Club in that position against Valladolid. A perfect way for such a committed and versatile player to end his time with Barca. 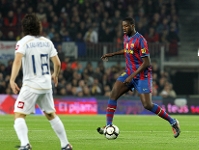 Touré Yaya made a tremendous effort to fit into the team on the pitch, but he also made an impact off the pitch in recent months by using the Catalan language in his dealings with the local press. A nice touch that was greatly appreciated.