Sporting Director Andoni Zubizarreta thanked Thiago for his desire to stay at Barça despite the offers that he might have received. "We also wanted you to carry on within this project" he said. 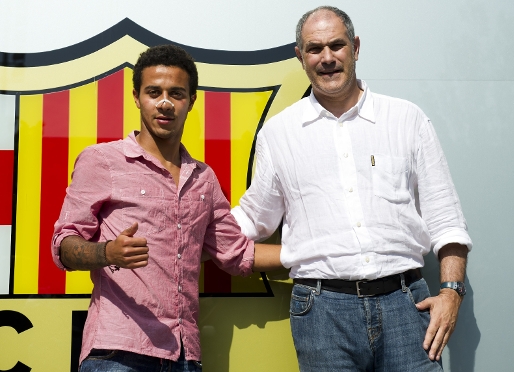 Once Thiago’s contract renewal, until 2015, was completed, Andoni Zubizarreta expressed his satisfaction with the midfielder’s desire to continue with the Club. "Offers? I neither know nor want to know. It’s pretty normal that he will have had offers. He’s a great player, very good in a 1-to-1 situation, he scores goals, has a good pass, gets into the area, and shows commitment” he said. 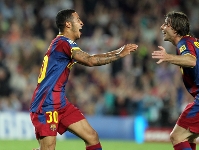 According to him, "after the season he’s had, both with the first team and in the reserves, and even more after his showing with the Under-21’s, it’s normal that he will have received more than one offer......but I also want to add that neither he nor his agents have used, at any time, any offers, to pressurise the Club. Something else we can thank him for" he said.

First we look inside the club

Speaking to Barça TV and www.fcbarcelona.cat , the Sporting Director described the understanding of both parties at all times: "Everything falls under its own weight. He wanted to stay with us, with all the good things that implies, and we also wanted him to continue within this project. So, with both parties so inclined, what’s happened is pretty normal".

Moreover, for Zubi, this contract renewal is another example of the Barça model. "It's part of our philosophy: we look at what we have in-house before looking elsewhere. Thiago is one of the clearest examples of ewhat we have in front of us".