Thiago renewed until 2015: "Now time for me to prove myself"

Thiago Alcantara has improved and extended his contract with the Club for two more seasons, until 30th June 2015. The buyout clause will be 90 million Euros.

After the renewal of his contract, which was signed on Wednesday afternoon, Thiago showed himself to be very happy both on Barēa TV and www.fcbarcelona.cat : "It's a dream to continue with this team and this club. I am really happy. Now It’s time to share it with my family”. He added: "I never thought about leaving. I’ve always wanted to be here". 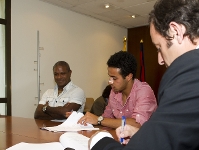 The midfielder, still recovering from the operation on his nose, was thankful for the education he’s received at Barēa: "The club has already done everything for me. They’ve trained me, I’ve come up through the youth ranks, they trusted me to play last season in the first team, and they offered to renew my contract”. As from now he made it clear that: "Now it’s up to me to prove that I can play for Barcelona and help the team to stay at the top".

Present at the signing of new contract were President Sandro Rosell, Sporting Director Andoni Zubizarreta, Director of Football Raul Sanllehi, and Thiago himself, accompanied by his father and his agents.