BarÁa set to clock up the miles in pre-season

BarÁa set to clock up the miles in pre-season

In three weeks time, BarÁa begin their pre-season with the prospect of more than 20,000 kilometres of travel ahead of them, including visits to Split, Munich, Washington, Miami and Dallas.

The first team squad return for pre-season training on Monday July 18th and they have nearly a month to prepare for their first official game – the Spanish Super Cup against Real Madrid. Once again, the pre-season will be focussed away from Catalonia, with the squad set to visit Croatia, Germany and the USA - and that implies plenty of air miles!

After a few days preparation in Barcelona, the team will fly out to Split for their first pre-season friendly against Hajduk Split on Saturday July 23rd (20.30) and clock up the first 2,384.62 kilometres of the pre-season.

Three days later, the squad fly out to Munich for the Audi Cup in Munich to be held on July 26th and 27th. Their first game will be against Internacional de Porto Alegre and, BarÁa will face AC Milan or Bayern Munich the next day, in either the final or the third and fourth place game. 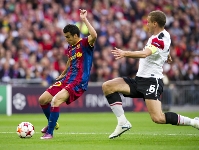 The squad will then fly straight to the US, where they begin their American Tour with a game against Manchester United on 31st July in Washington (kick off 01.00 Catalan time). The trip from Munich to the States will mean a further 6,811.34 kilometres in the air.

Miami is actually further away from Washington than Munich or Split are from Barcelona and the team will make another long flight to Florida for the game against Chivas on 4th August (kick off 02.00 Catalan time).

There’s a further 1,785.02 kilometre haul between Miami and Dallas, where Guardiola’s team will play the final game of their US Tour against Club Amťrica on August 6th (kick off 22.00 Catalan time).

The longest trip of all will be the return flight from Texas, when the squad will have to endure an eight thousand kilometre flight before they touch down once again in Catalonia. The travelling doesn’t stop there of course, as the squad will have to pack their bags again a week later for the first leg of the Spanish Super Cup against Real Madrid at the Santiago Bernabeu on August 14th.