BarÁa and Santos have met a number of times, mainly at the Camp Nou and with Pele as the big draw. BarÁa hold the advantage in games between the two, including the t recent meeting in the 1998 Gamper Trophy. 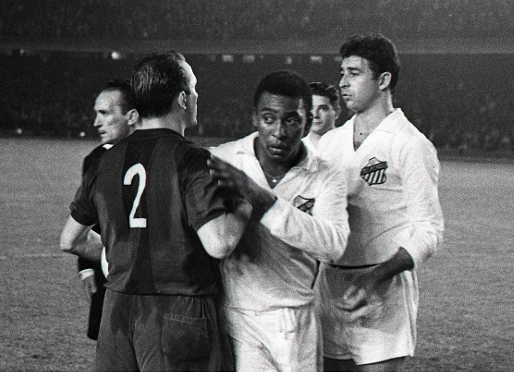 More info
Pelť’s Santos came to the Camp Nou – in 1959, 1960 and 1963 – and after a 1-5 thrashing in the first meeting, the Catalans gradually got the measure of the Brazilian giants and won the next two matches 4-3 and 2-0. In the twilight of his career, Pele again faced BarÁa and lost 4-1 in the Ramon Carranza Trophy. The most recent meeting between the two was in the Joan Gamper Trophy of 1998, when the game was won on penalties by BarÁa after a 2-2 draw.

On June 28th 1959, Santos steamrollered BarÁa 1-5. Evaristo scored for the locals, but Pelť (2), Dorval (2) and Coutinho saw off the then reigning Spanish Champions, coached by Helenio Herrera. For that game though, Herrera delegated his assistant Enric Rabassa to take charge, and the team was full of fringe players, as well as some of the regulars such as Villaverde, Kocsis, Evaristo and Czibor, as well as the Espanyol players BartolŪ and RecamŠn. Pele, who was just 18 and in contrast, Jair at 38, were the Santos stars and the Brazilian coach Luis Alonso claimed after the game that his young star: “had only played at 20% of his possibilities”.

It was a different story a year later, when Santos returned to the Camp Nou and BarÁa turned out with all their stars – including Kubala and SuŠrez for instance – and put in a great first 45 minutes to go 4-0 up with goals from SuŠrez (2), Villaverde and Kubala. The Brazilians took advantage of a tiring BarÁa team after the break and goals from Pepe (2) and Pelť nearly brought them a draw in what ended as a great spectacle of a game. 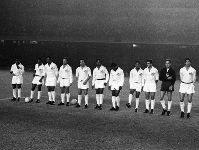 The third visit came on June 12th 1963 and was maybe the easiest for BarÁa. Although they were not enjoying the best of moments, the Catalans played a great game that night - the game kicked off at 22.45- as Eladio, Vergťs, Re, Fustť and company put in a classic performance to win 2-0 with goals from Pereda and Zaballa against a technically brilliant, but ineffective Santos. The then two time World Cup winner Pele was pretty anonymous that night.

Carranza Trophy at the end of Pele’s career 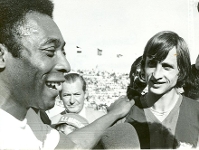 The two next met in Cadiz in the third and fourth place game on September 1st 1974 at the Ramon de Carranza Tournament after BarÁa had lost 2-0 to Palmeiras and Espanyol had beaten Santos by the same score. Despite boasting two greats -Johan Cruyff and Pelť, the game was very much a summer friendly as BarÁa ran out 4-1 winners with goals from Neeskens (2), Marcial and Asensi and a penalty from Pele three minutes from the end of the game and the great man retired from the professional game just a few minutes later in October. 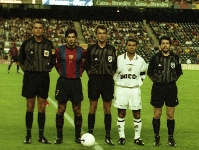 The last time the two played was in the XXXIII Trofeu Joan Gamper, on August 25th 1998. It was a closely fought game and Louis van Gaal’s team could only beat Santos 5-4 on penalties after the two drew 2-2, with Luis Enrique and Figo on target for BarÁa. After the game, BarÁa ex-president Enric Llaudet handed the trophy to BarÁa captain Luis Figo and Manuel Gamper, the grandson of the Club’s founder, handed the Santos captain the runners up trophy.