Three years of the Guardiola era

This Friday is the third anniversary of Josep Guardiola’s presentation as first team manager. On June 17, 2008, a project began that has gone on to make history. 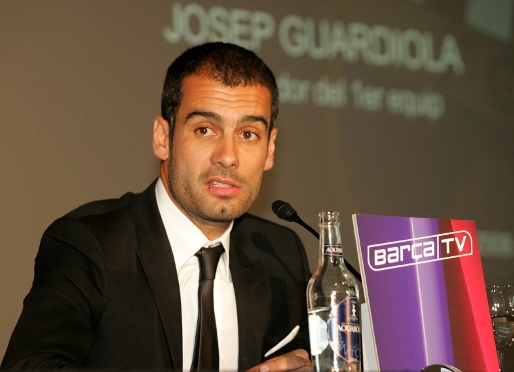 Josep Guardiola has an extraordfinary record at the heklm of the first team, having won 10 titles out of a possible 13:

3 Leagues
2 Champions leagues
2 Spanish Supercups
1 Clubs World Cup
1 Spanish Supercup
1 Copa del Rey
“I cannot promise titles, but I am sure the people will be proud of us”. Those were the words of a young coach of just 37 years, who had just taken Barça B up to Division 2B. He had achieved everything as a player, but was only just starting out as a professional coach. It was Josep Guardiola, but three years after pronouncing those words, he has achieved recognition as the architect of the best Barça team ever, and one of the best teams ever to grace the football world.

Sala París was the place where Guardiola told the press and fans about his ambitions. Despite his modesty, he said his desire was to build a winning club, and that he was convinced of his possibilities. “I feel strong and ready, if not, I wouldn’t be here. I have no fear and the challenge doesn’t frighten me. We know it won’t be easy, but I’ll persist”. 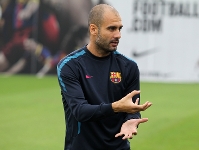 Guardiola said little about techniques or tactics, limiting himself to saying “the most important thing is to win and all styles are good for winning. I know what style I want and want to transmit. I’m a fan of attacking football because of the way I was trained and I believe a lot in talent in hard work.” He certainly managed to keep his word.

Guardiola promised no titles, just work, commitment and dedication. Neither did he ask for patience, because he knows Barcelona is a team where the players and coaches are judged on results. He didn’t need to. The team responded to perfection by winning a historic treble in his first year and going on to shine in the most brilliant period in club history.