It is three years today since Barša B won promotion to Division 2B after winning 3rd Division Group V and defeating Castillo and Barbastro in the play offs. It was Pep Guardiolaĺs first major achievement as a manager. 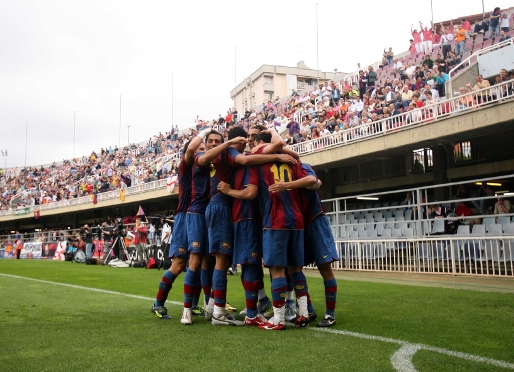 On Wednesday evening, Barša TV will be repeating that historic playoff match with Barbastre, in which promotion to Division 2B was clinched. The broadcast starts at 21.15.
Sunday June 15, 2008, was the day, and the Miniestadi, with 11,000 spectators, was the venue. Castillo had already been beaten, and in the first leg of the play-off final, Barša had already done half the job by winning 2-0 away.

Barša still wanted to win the match, and went ahead through VÝctor Vßzquez just before the break. They ultimately qualified for the higher division without conceding a goal in the play offs and unbeaten all season at the Miniestadi. 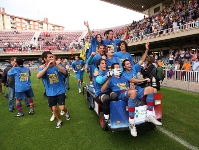 Once the game was over, the players celebrated the win with several of the coaches, in front of the fans who had stayed to enjoy the party. But Guardiola refused to have anything to do with it, and after shaking hands with his Barbastro colleague, he and ‘Tito’ Vilanova withdrew to the dressing room and watched the events unfold on Barša TV. Guardiola wanted it to be the players that got the credit, and therefore preferred to step out of the limelight.

Of the players involved in that win, three would follow Pep Guardiola into the first team for the next season. Sergio Busquets, Pedro and Jeffren would all be appearing in the Camp Nou, where Guardiola was about to take over from Frank Rijkaard. Others like Oier and VÝctor Vßzquez have also had first team chances but also remained with new B team boss Luis Enrique. Others such as Abraham, Gay, Xavi Torres and Cˇrcoles would also make their first division debuts under Guardiola.

After that terrific year at the helm of Barša B, Guardiola, has gone on to win three Ligas, one Copa del Rey, two Champions Leagues, one Clubs World Cup and two Spanish and one European Supercup. But he has also gone on to lead a team that has amazed the footballing world with the same delightful style of play that all started three years ago at the Miniestadi.