Legendary BarÁa defender Milan, Franco Baresi, has declared himself an admirer of BarÁa. He feels the key to Pep Guardiolaís success is that ďhe encourages the players, and gets everybody participating, making them happy when they playĒ.

Franco Baresi is one of the living legends of world football. The master sweeper was the last line of defence for the great Milan side coached by Arrigo Sacchi and Fabio Capello and also for Italy in the 80s and early 90s. He retired in 1997, but still collaborates with Milan on various projects, and today spoke to BarÁa TV and www.fcbarcelona.cat about the current-day BarÁa team, which he compares to Sacchi’s Milan and considers better organised than the famous Dream Team.

- BarÁa fans remember Franco Baresi from the days when Milan played Johan Cruyff’s BarÁa. What do you remember of those games?
“I certainly remember that Barcelona was a great team. I didn’t play in the 94 final because I was suspended, but it was a nice game for us. Exceptional. We feared Barcelona because they were such a strong team, they had won the league and had some good players. Cruyff’s football was always spectacular, but I think Milan deserved to win that final, we played great football”. 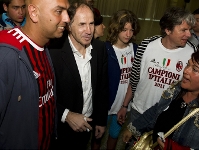 - ŅIs the current BarÁa an evolution of the one managed by Cruyff?
“It’s different, they’re both great teams, with great players. I think Guardiola’s team is much more organised. They play attacking football but are also well organised, very skilful, great quality, fast with the ball... I’m sure the current team is much more complete, and much harder to beat”.

- ŅHow would you define Guardiola’s BarÁa?
“It’s a nice team to watch. For football lovers, I think it’s a pleasure to watch BarÁa because they have some formidable midfielders and forwards. I like them a lot because it’s nice football and because of the show they offer”.

- They’re often compared to Arrigo Sacchi’s Milan. As somebody who played for one of the two which do you think will leave the biggest impact?
“It is hard to make comparisons. They are different times, different moments. Sacchi’s Milan was a great team, they played a new kind of football, it meant a major evolution, the way they combined quality with organisation. I think you can compare them with Guardiola’s Barcelona in this sense. Great players and well organised. They are two great teams that are difficult to compare”.

- Which do you think has innovated football the most?
“Sacchi was fundamental for Italian football at that time, because of the new ideas he brought to Italian and world football. He was very important. Now Guardiola is also giving Barcelona continuity of play and results. It is never easy to win in Spain, also in the world, when they play such nice, attacking and organised football. That’s their strength: continuity of results and putting on a show”.

- They are saying that this BarÁa is one of the best ever. Do you agree?
“Yes, I think so, In recent years, BarÁa have won a lot and have played well, and kept it up. In the last five or six years, BarÁa have had fabulous, great players. It isn’t easy to win everything they have recently”.

- Is there any current BarÁa player like Franco Baresi? 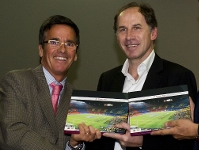 “I like a lot of the players. The defenders Piquť and Puyol and the midfielders Xavi, Iniesta, Busquets. They’re extraordinary. It must be a pleasure to play with them. And also Messi and Villa, all of them. I should really name them all, they’re such a complete team. I was once asked if I’d like to play where Piquť does in this team. I said that Piquť has fun because he can see what the team’s doing. He’s very good, and so important in defence, and I think it would be great to play with team mates like that”.

How do you think Gerard Piquť is progressing?
“He has a great future, he’s very young and he’s won everything. He’s world champion and Spanish champion with Barcelona. He has made huge progress and has a massive future ahead”.

- And Carles Puyol’s career?
“Puyol is standard, a legend for Catalans, for Barcelona. He is an example of professionalism, of behaviour, of rapport. And he’s played at that level for years, I congratulate him”.

- How can you explain the way these two defenders receive more fouls than they commit?
“It’s a massive skill to be able to get the ball off opponents without committing a foul, and they also help support the attack. That’s the secret to Barcelona: the players are encouraged, and everybody participates, making them happy when they play”.

- Is there any way of stopping the European champions?
“Can they be beaten? You have to play well and perhaps be quicker than them, but it’s not easy. You need to catch BarÁa off their form and then perhaps you can beat them”.

-Would you like to have had any of these BarÁa players in ‘your’ Milan?
“I think Milan would have made good use of Iniesta, Xavi and Messi. They’d have done us good”.