“We have a lot of challenges ahead”

Piqué: “We have a lot of challenges ahead”

Gerard Piqué believes the team is as ambitious as ever about next season. Although Barça have won everything, they still have challenges ahead, such as “winning the fourth Liga and retaining the Champions League”.

One of the images of the Wembley final that was seen around the world was that of captain Carles Puyol insisting that Éric Abidal should be the man to receive the Champions League trophy. Piqué feels that was “a unique gesture. We are so lucky to have a captain like Puyol, who has such a big heart. It shows what our squad is like, we are like brothers, and that struck the heart of the Barça fans and anyone who likes football”.
The Ciutat Esportiva Joan Gamper was the venue chosen for Nike to present the new boots that Gerard Piqué will be wearing from now on. After winning the double and then travelling with the Spanish national team for two friendlies, the defender has spoken to the press.

Objectives for next year

His main topic of conversation was next season. “There are a lot of challenges ahead. Winning the fourth Liga, retaining the Champions League and the European Championship with Spain”, said Piqué. He knows that a fourth league in a row would equal the achievement of the Dream Team, and also they could become the first team to win back-to-back Champions League titles since the new format was introduced.

Piqué has been at the club for the same length of time as Guardiola as manager, and so has also won ten titles in three years. He believes it is getting harder and harder to continue being successful and “not because we are less ambitious, but because the other teams are spending more to win titles … but we are as keen as ever, and that’s how we can achieve the targets next year”. 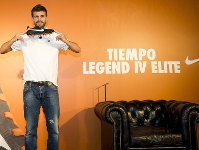 In his speech after winning the Champions League at the Camp Nou, Piqué insisted that “we don’t take drugs, we don’t dive, we don’t bribe referees, we just play football”. In saying so, he explained today that “I wanted to make it clear that we haven’t done any of the things they have accused us of”. Piqué knows that such attacks are likely to continue next season, but “we have to put up with them if we want to win titles. The team is prepared for that”.

As ever, the close season rumours are attaching many names to the Barça shirt for next season, and one of those is Cesc Fŕbregas. Piqué describes his fellow Catalan as “a great player and the kind of player that would fit in at Barça, he knows the language we speak on the pitch”. But although he would be delighted for Cesc to come to Barcelona “anything can happen in the world of football”.

Piqué also spoke about Rossi, who he played alongside at Manchester United. “He has an exquisite left foot, he scores and he’s quick. He is a player that would work at Barça and gets 10 out of 10 as a person”. Alexis Sánchez, another name that has been mentioned, “is great in one on ones”.