Javier Mascherano is celebrating his 27th birthday this Wednesday, his first one since he’s been wearing a Barēa shirt. With the League and the Champions League as presents we’re confident that Javier will have one of his best birthdays in recent yea

He makes his voice heard

Javier Mascherano is one of those players who other players listen to, as his talking is clear and convincing. Proof of this is that this year in one of his press conferences at the Joan Gamper training ground he received applause from the journalists present. Mascherano is a player with personality, and Guardiola confirmed that fact when he said that "if he’s captain of the Argentine national team at his age, it’s no coincidence".
On June 8, 1984 Javier Alejandro Mascherano was born in the Argentinian town of San Lorenzo. On Wednesday he’ll be celebrating his 27th birthday. With Barēa’s season already over, and him getting ready to join the Argentinian squad in preparation for the Copa America this summer, it's time to take stock of the year in which Mascherano signed for FC Barcelona, and won his first Champions League.

Javier Mascherano became a FC Barcelona player on the 30th of August 2010. His desire to play at the Camp Nou was evident from the first moment, when he took a 20% drop in his wages to help the transfer along. It was a sign of his commitment, which has continued throughout the season.

From being Busquet’s substitute ... 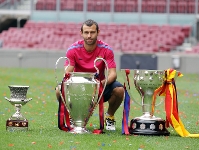 Javier Mascherano was fully aware when he came to Barcelona that he had a world champion, Sergio Busquets, in front of him, a player who was a fixture in Guardiola’s team. For the Argentinian this was never a problem, but another step forward in his footballing education. He recognised that fact in the first interview that he gave to Barēa TV and www.fcbarcelona.cat , when he acknowledged that "the demands of a club like Barēa will help me grow as a footballer".

... to being a key player in defence

Throughout the season Mascherano's role changed, to the point where Guardiola chose him as the best option as one of the central defenders in the final run-in, in the absence of first team defenders. With all this going on, in April on the Barēa TV program “Station Camp Nou”, Mascherano said "I would have preferred to play less and Puyol and Abidal had played more”. Just another demonstration of the solidarity and camaraderie within the team that Mascherano became fully integrated in from day one. 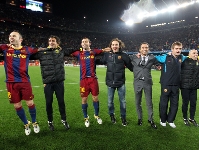 In the final balance his defensive performances were first class, and despite losing in the Final of the Spanish Cup, where he was in the starting 11, the Argentinian was a key player in the Champions League games against Real Madrid, and the Wembley Final, starting in all 3 games. Moreover, despite the fear of being a player who picked up quite a few yellow cards , Mascherano managed to fix that problem, and finished the season having picked up only six yellow cards in the the 27 games played, and in the 11 games played in the Champions League he only picked up 1 card. One of the few challenges remaining to him is the fact that he’s the only outfield player who hasn’t scored a goal for FC Barcelona.