Barça on the cover of ‘Newsweek’

Barça on the cover of ‘Newsweek’

The prestigious US magazine “Newsweek” features the Barça team on the front of next week’s edition, posing the question to its readers –“is this the best team of all time?” 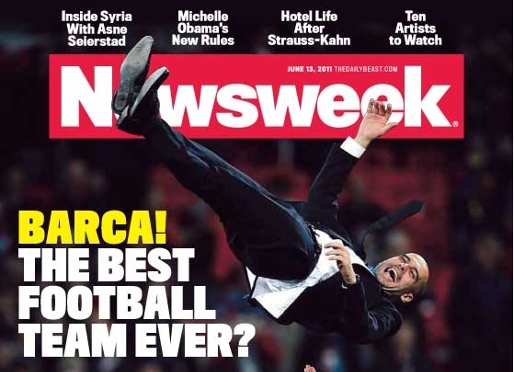 In the Latin American, European and Asian edition published on June 13th, Newsweek ties to pinpoint the reasons why Guardiola’s team have been so successful, following their latest Champions League title. The boss’ photo, surrounded by his players, figures on the magazine cover and inside, journalist Jimmy Burns tries to figure out if this Barça team really is the best ever.

The article stresses the team’s abilities with the ball at their feet and draws attention to the contribution of Xavi and Iniesta, as well as how the players such as Mascherano, Abidal or Villa who have not come up through the Barça system have been able to adapt to the team’s way of playing.

‘Newsweek’ compares the team’s style of play to a choreographed dance, whilst not overlooking the fact that Guardiola’s men have not forgotten the fundamentals of the game –to attack, score goals and win. The article also makes it clear that Pep Guardiola is a fundamental piece within the group, as well as a promoter of a style of play and an attitude that has brought so much success.

Click HERE to read the full article from Newsweek