Villa: "Itĺs been a perfect season"

Villa: "Itĺs been a perfect season"

David Villa gave an enthusiastic assessment of his first season as a Barša player. The striker told Barša TV that it would be almost impossible to improve what has been achieved. 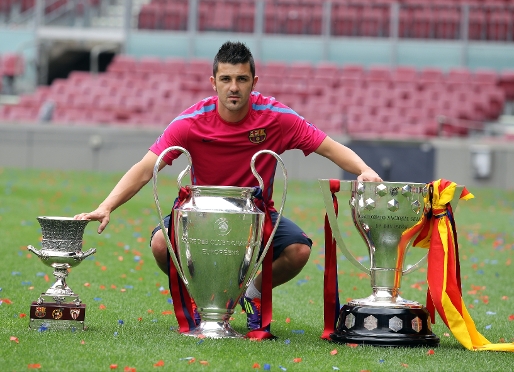 David Villa will begin the summer break after playing with the Spanish team in the two friendly matches in the U.S. and Venezuela on June 4th and June 7th: "I'll be with family and friends enjoying what I couldn’t do during the season. I’ll take a break so that I’ll be able to face up to a new season with even more energy and enthusiasm."
He came and fitted in straight away. David Villa can boast of having won the League and Champions League in his first season with Barša. Impossible to beat that?. "I think the balance is almost perfect, despite having been beaten in the Spanish Cup Final. The most important thing is how the team has competed and how we’ve given everything in all the competitions" a proud David Villa told Barša TV.

A photo dreamed about 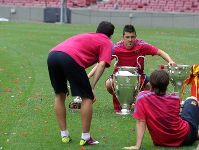 Not in the wildest of his dreams could David Villa imagine that a year after signing for Barša he’d have his photo taken alongside the League and Champions League trophies, and the Spanish Super Cup, the three competitions he’s won in his first season at the club: "It's a photo to dream about. I’m really happy how things have gone from day one until the end. Fate decided that I would come to Barša this year and I’m totally happy"

"One can always improve"

In view of the results, it seems unlikely that the team will be able to better the achievements of the past three seasons. Villa is fully aware of this but also believes that there is always room for improvement: "One can always improve. We have to carry on the same way again and try to be back next year, being photographed alongside even more trophies. "