Barça - masters of the double

Barça - masters of the double

There’s no Champions without the League. The four trophies won by Barça have always been accompanied by the League Title in the same season. Barça are already the team who have won more doubles in Europe. 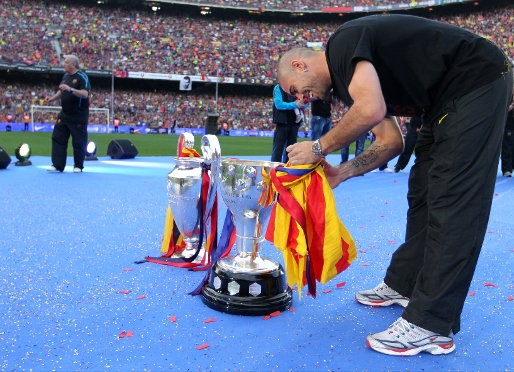 After being proclaimed League Champions, FC Barcelona conquered Europe in London, a feat that Barça have repeated four times. The European Cup at Wembley in 1992, and the Champions League in Paris 2006, Rome 2009, and New Wembley in 2011, all entered the club museum at the same time as the League Trophy.

2009 deserves special mention. In Guardiola's first year in charge of the first team, Barça finished the season with a historic treble. The first trophy was a the Spanish Cup against Athletic Bilbao (4-1), then the League, and finally the Champions League against Manchester United (2-0).

Milan, Real Madrid, Bayern Munich and Ajax are, with three double triumphs, the teams that come closest to Barca’s record. Only FC Barcelona done it every time, as the rest of these teams have won more Champions than the famous double.

Super Cup, League, and Champions League for the third time

The 2010/11 season has ended with a new treble. In August Barça won the Spanish Super Cup against Sevilla, and in May came the League Title, followed by the Champions League. In 2006, the team then managed by Frank Rijkaard also began the season winning the Super Cup, then the League, and closed the season by taking the Champions League Title. The Dream Team was the first Barça team to achieve this, in 1992.