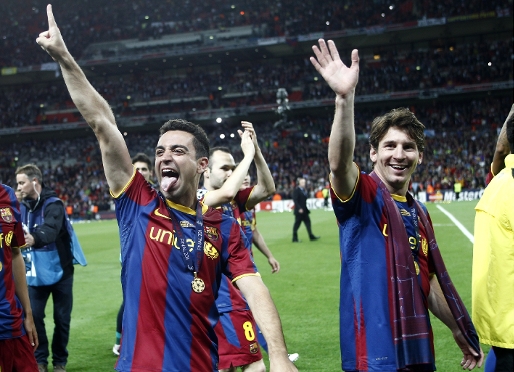 Five players from the current Barça squad have won three Champions Leagues with Barça in the last six years. This record, only within reach of the best, has been achieved by Valdes, Puyol, Xavi, Iniesta and Messi, 5 homegrown players.

► Victor Valdes, 29, is the only goalkeeper in the history of the club who has participated in three Champions League Finals. In the starting 11, and a winner in all three, Valdes was one of the great protagonists in the Paris Final and was also a key player in Rome. In London he had a much easier match.

► Carles Puyol, 33. The captain with most Champions medals in Barça’s history was in the starting 11 in Paris and Rome, where he lifted the trophies. At Wembley he was on the bench, and came on for the last few minutes of the game, making a fantastic gesture in allowing Eric Abidal to climb the Wembley steps to lift the fourth Champions League Trophy in Barça’s history. 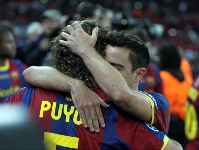 ► Xavi Hernandez, 31. Injured in 2006, decisive in 2009 and brilliant in 2011, Xavi represents better than anyone what the current team is all about. His Finals will be remembered for his assists for Messi, in Rome, and Pedro in London.

► Andres Iniesta, 27. In Paris in 2006 he came off the bench and split the Arsenal defense at the start of the move that ended with Eto'o scoring the equaliser. In Rome in 2009 one of his breaks ended with another goal from Eto'o, in this case making the scoreline 1-0. At Wembley 2011, he directed the Barça attacks with unequalled talent.

► Leo Messi, 23. Better each time. Messi missed the 2006 Final through injury, amazed the world with his goal in Rome in 2009, and at Wembley became European triple champion thanks to his fantastic goal. Only Eto'o and Messi have scored for Barca in two different Finals.