Third league in a row for Guardiola

Third league in a row for Guardiola

FC Barcelona have won their 21st league title, and it’s now three-out-of-three for manager Josep Guardiola, who has produced a winning style that has amazed the footballing world. 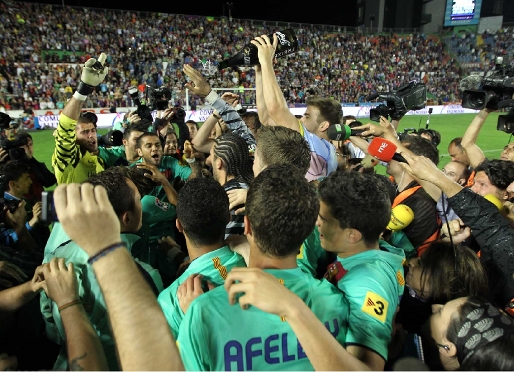 More info
It is two decades since a Barça team was born that featured a young Josep Guardiola in midfield, and which astounded the world with its vibrant attacking style. That Dream Team won four consecutive leagues, but also created a new blend of football that has now become the Camp Nou trademark. It’s a new way of understanding football, which involves possession, combination plays and a focus on attacking rather than defending. The football that has now become the FC Barcelona identity.

Twenty years on, and Guardiola is continuing his work in the role of manager, and the club is once again flying high at the top of world football. In just three years he has won as many league titles, and nine major honours in total. As he never tires of telling us in his press conferences, the only thing that ultimately needs to matter in football is “attack, attack and attack.”

Only Johan Cruyff’s Barça can claim to have won three titles in a row, which eventually became four, so there is no arguing that what Guardiola and his players have done is quite some achievement. And he is to be merited even more for managing to do that in his first three seasons in charge. Cruyff didn’t get his hands on the league trophy until his third year at the club.

Several coaches worked at the club between Guardiola’s time as a player and his return as manager (Robson, Van Gaal, Serra Ferrer, Rexach, Antic and Rijkaard), but the one who played the greatest role in returning the Barça style to its former glory was Frank Rijkaard, who won two leagues and one Champions League and spread the gospel of constant pressure inside the opposition’s half. Guardiola picked up where he left off and perfected the project, turning the team into a veritable goal machine (this season they have almost made it to 150) and also bagging title after title. The third league in a row is just the latest in a series of astonishing achievements.