Captain Puyol: “It is a very important title”

Captain Puyol: “It is a very important title”

Carles Puyol has said after tonight’s game in Valencia that now is the time to celebrate the league title they have won. “It is a very important title and afterwards we can rest and start preparing for the final at Wembley”, he said. 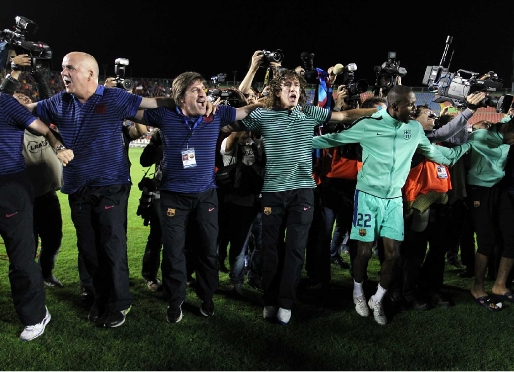 The following are other statements made tonight by FC Barcelona players.

“We have worked hard against a strong rival in Madrid.”

“Now is the time to celebrate it.”

“This title shows how hungry this team is.”

“It has been a very difficult year and the fans know that. Today we can celebrate to the maximum. It has been a hard-fought title and now’s the time for celebrations.”

“It has been very hard. Of the ones I’ve won I’d say it’s been the hardest league of all.”

“It has been very tough in terms of the media, but we have managed to isolate ourselves very well.”

“Now we can celebrate in Barcelona.”

“It is different, because of the importance of winning the league with the first team.”

“Yes, I do believe it. Now we’ll celebrate it like we should.”

“A title always feels good and this league has been very difficult to win. This team deserves so much merit. I want to congratulate all Barça supporters.”

“The fans deserve it.”

“We are very happy. Now’s the time to enjoy the league.”

“It all happens so fast you get no time to enjoy it.”

“You have to make the maximum effort to win the league.”

“Now is the time to celebrate.”