Montoya out between 4 and 6 weeks

Montoya out between 4 and 6 weeks

MartĒn Montoya suffered a dislocated left shoulder and a fractured collarbone as a result of his fall following a clash with Raul Tamudo after 10 minutes in tonightÆs game. He will be out for between 4 and 6 weeks. 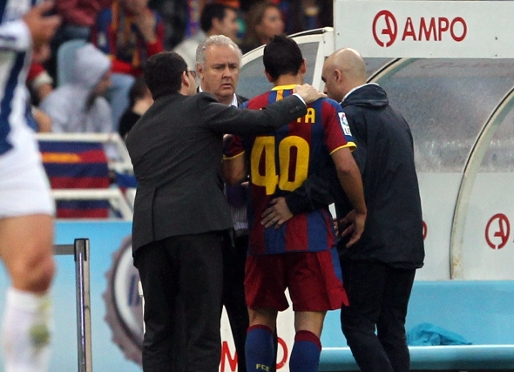 MartĒn Montoya’s debut ended with a really unlucky injury, as he was carried off after just 10 minutes, following a tackle from behind by Raul Tamudo which saw him fall awkwardly.

Montoya was quickly replaced by Dani Alves and Club doctors examined him at the ground, concluding he had a dislocated left shoulder and a fractured collarbone and will now be out for between 4 and 6 weeks.

Gaby Milito also suffered an injury, suffering a strain in his left calf muscle just as he scored a disallowed goal towards the end of the game. He will be given further tests when the squad are back in Barcelona on Sunday.