To Anoeta, four years on

To Anoeta, four years on

On Saturday, Barēa go to Anoeta for the first time since 2007. Their last visit to Real Sociedad ended in a 2-0 win against a side that ultimately faced the drop to the second division. 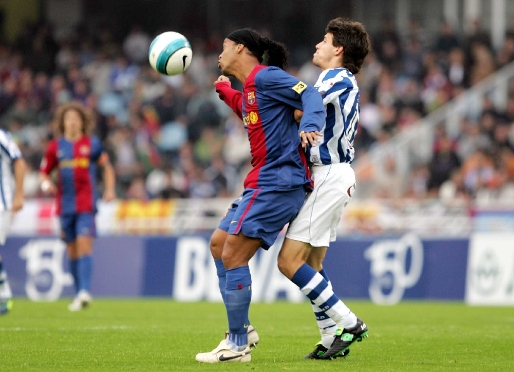 Both at the old Atotxa stadium and the new Anoeta, Barēa have often found things heavy going. In 63 games between Real Sociedad and Barēa in the Basque Country, Barēa have only won 17. They have suffered 24 defeats and there have been 22 draws. In these games, Real Sociedad have scored 89 goals, four more than Barēa with 85.
After four years, Barēa are going back to tread the Anoeta turf. The last time was on the 33rd day of the League Championship of 2006/07, when Frank Rijkaard took the team to San Sebastian as league leaders by just one point over Sevilla, and two over third placed Real Madrid. Barēa won 2-0 after losing their last two away matches. 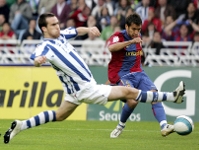 Barēa’s side featured Valdés, Zambrotta, Thuram, Puyol, Gio, Edmķlson, Xavi, Iniesta, Messi, Eto’o and Ronaldinho, with Gudjohnsen and Oleguer coming on in the second half. Without playing brilliant football, Barēa dominated the first 45 minutes and got the best chances, with Xavi coming close after 27 when keeper Bravo turned the ball behind for a corner and the same man also had a goal disallowed for offside. Real Sociedad had set out to defend, and got what they wanted when the first half ended scoreless.

Two minutes after the break, Ronaldinho and Iniesta came into their own. The latter scored following an assist from the Brazilian, and that meant Miguel Angel Lotina was finally forced to send his team into attack. But that just served to create more space for Barēa.

Eto’o and Ronaldinho tested Bravo and then Messi was the victim of an unawarded penalty by referee Teixiera Vitienes. Only Brazilian Savio was causing any danger on Valdés’ goal. The second goal came late on, from another assist from Ronaldinho to allow Eto’o to slot home beneath Bravo. The three points meant Barēa collected three points that kept them top of the league, while Real Madrid moved into second place by beating Sevilla 3-2.