The reliability of Montoya and Sergi Roberto

The reliability of Montoya and Sergi Roberto

Full back Martķn Montoya and midfielder Sergi Roberto have proven excellent members of the Barēa B and are considered genuine options to cover the first team’s needs. 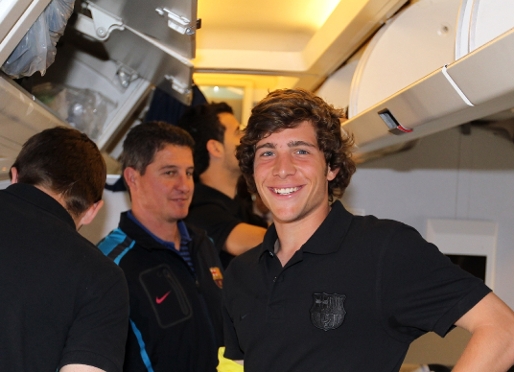 Montoya and Sergi Roberto, along with Fontąs and Thiago, being named in a Champions League semi final squad shows the faith Guardiola has in players produced by the club’s youth system.

They were educated at La Masia, developed their football at the Ciutat Esportiva, learned the trade in the Miniestadi and are therefore ready to answer the first team call at any moment.

The Barēa youth system offers incalculable value. And Guardiola knows that if ever he is troubled by injuries or suspensions that he has plenty of players with second division experience that can serve his needs perfectly. 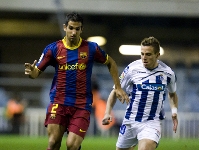 Martķn Montoya Torralba is a 20 year old right back who can also play on the left. Fast and powerful, he covers well and is particularly adept at breaking down opposing counter attacks.

When the team attacks, Montoya makes useful runs and is a provider of crosses, but his greatest virtues are in defence, where he reads the game brilliantly, and uses his speed and aggression to wonderful effect.

He has played at the club since the Benjamķ B, and is well used to the 3-4-3 system that requires full backs to play many different roles.

Guardiola handed him his debut at Mallorca earlier this season as a substitute for Adriano. Montoya has been with Barēa B for two seasons.

Sergi Roberto Carnicer is a very different type of player to the typical Barēa central playmaker. The 19 year old doesn’t only pass the ball creatively, but also makes runs into the area where he is strong in the air and has a powerful shot.

Sergi Roberto is also adept at breaking down the opposition’s play, and although he is right footed, he can also used his left. This is his second season with the B team, where he also been played in a more defensive role. He originally came to the club from Nąstic Tarragona, and then progressed from Cadet B to Cadet A, Juvenil B and A and now Barēa B. He made his first team debut earlier this season against Ceuta in the Copa del Rey.