The team is now in Madrid

The team is now in Madrid

FC Barcelona players arrived in Madrid early this Tuesday afternoon, when the plane carrying the team landed at Barajas airport just after one o'clock. 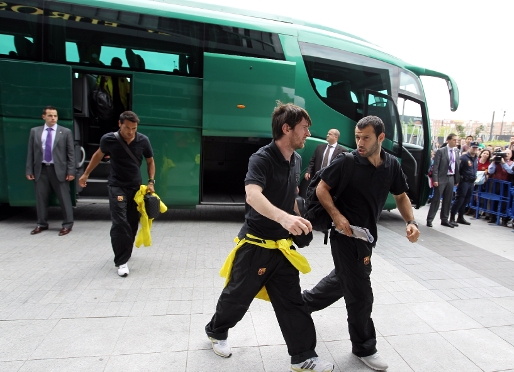 More info
Ten days after traveling to Madrid to play in the 32nd league game of the season, FC Barcelona had to catch a plane to go to Madrid again. Now, however, it’s the Champions League which takes centre stage after the clásicos of the League and Cup. On Wednesday it’s the first leg of the Champions League semi-final between Real Madrid and FC Barcelona at the Santiago Bernabeu, with the return leg next Tuesday at the Camp Nou, when it will be decided which of the two teams will make it to the Wembley final. 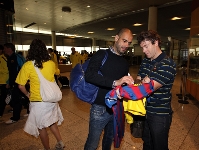 The 20 players in the squad for the game are already in Madrid. The players set off this morning at 11.00 from the Camp Nou to El Prat Airport, where the scheduled departure time for Madrid was at 12.00. Traffic on the runway caused a slight delay of 20 minutes, which meant that the plane carrying the Barça squad finally landed in Barajas at 13.20. 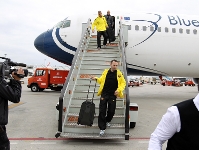 The group was led by FC Barcelona Vice President, Josep Maria Bartomeu. Also present were the Vice President of the Institutional Area, Carles Vilarrubi and directors Toni Freixa, Jordi Moix, Javier Bordas, and Josep Ramon Vidal-Abarca. Also travelling with the group was the Sports Director of Professional Football, Andoni Zubizarreta, who attended the media before flying.

President Sandro Rosell, who is already in Madrid, will also be present for the semi-final of the Champions League, as well as other members of the Board, who are scheduled to travel on Wednesday.

On arriving Pep Guardiola's team went straight to the hotel where they’ll remain until this evening, when the players will go to the Bernabéu stadium to train. Previously, at 18.30 Javier Mascherano will attend a press conference. At 19.00 hours Barça will train at the stadium, and once the session finishes, it’ll be the turn of Guardiola to face the media at a press conference.