Leo Messi’s 50th goal of the season breaks a new record in Spanish football. Messi has overtaken Ferenc Puskás’s record from the 1959/60 season (49 goals in all competitions). Here we review this, and other statistics, from the match. 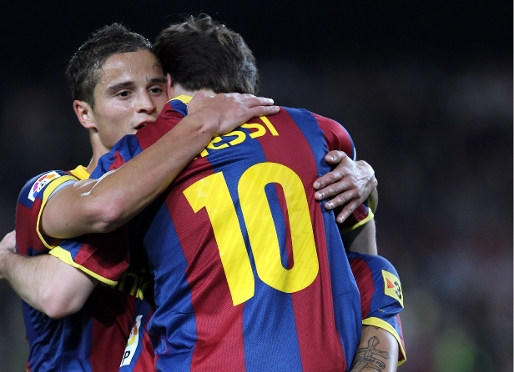 ► The other goalscorer against Osasuna was striker Villa, who thus ended his run of 11 consecutive games without scoring.

► Only four players who started in the Cup Final did so against Osasuna. They were Alves, Mascherano, Busquets and Villa. Iniesta, Messi and Xavi all came on later.

► Mascherano, indeed, was one of Barça’s best players on Saturday. He won more balls than anybody (14).

► The Osasuna game was not one of Barça’s best. In fact, Ricardo conceded two goals but didn’t make a single save, while Valdes had 6 saves to make.

► Jeffren started a game in the League for the first time this season. The last time he started a match was last season against Rubin Kazan (2-0).

► Pique, who was left out of the squad for the Osasuna game, had started in the last 8 games. He hadn’t missed a match since the Champions League game against Arsenal (3-1), when he was suspended. In fact, he has only missed 2 of the last 26 Barça matches.

► With the 2-0 win, Barça have now gone 31 consecutive games without losing in the League (since the 2-0 defeat against Hercules, in the 2nd match of the season). With 88 points and with 15 still to play for, Barça can beat last season’s League record of 99 points.