Guardiola: “We’ll try to be brave and daring”

Guardiola: “We’ll try to be brave and daring”

In the cup final, Guardiola is not planning to change the approach he has faithfully stood by since taking over as manager. He considers the opportunity to play the final against Madrid to be “a gift”. 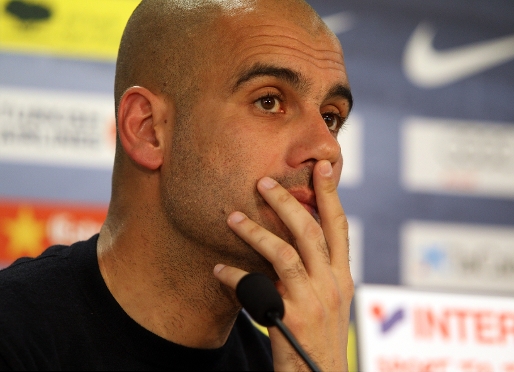 The FC Barcelona manager knows that Real Madrid can play many different ways, and therefore doesn’t think last Saturday’s match will necessarily serve as a guide for Wednesday’s cup final. “We have spoken about what they did and what we suspect they’ll do” he said, adding that he feels the best method for Barça is “to improve in order to generate more play and more goalscoring chances”. 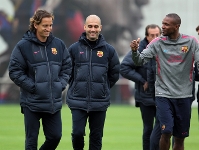 But Pep Guardiola will not be making any major modifications to his plan. “They know who we are, and we might change some small details, but the essence won’t change” he said. “But we will try to be brave and daring and go out there to win”.

Guardiola also noted that “Barcelona have virtues that Madrid do not, but Madrid has others that Barcelona does not. Whoever imposes their game will win … we will be doing what we can by playing football”.

He naturally wants to win in Valencia, but is also delighted just to be there. “It is a gift to have reached the final” he said.

Guardiola has made it patently clear for some time now that it will José Manuel Pinto who plays in goal for his team at Mestalla. “Tomorrow is about Pinto and ten more. He has always played in the cup and he will continue to do so … it would be a lack of respect to him and the other players if he wasn’t to play”. 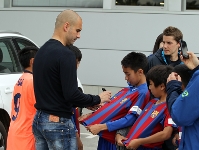 David Villa has been struggling to score in recent matches, but Guardiola still considers the striker to be a key element of his team. “There are so many intangible things that are hard to see. Details that thanks to him generate so many good things for the team … It is never easy in your first year at Barça, and just after a World Cup … But he has done so with enthusiasm and generosity”.

Guardiola also spoke about Andoni Zubizarreta renewing his contract until 2013. “The club is in very safe hands. It was with Txiki and now it is with Andoni” he said. “He is a hard worker and he doesn’t miss a thing”.