Seven possible debutants in a Final

Seven possible debutants in a Final

Up to seven FC Barcelona players have never participated in a Spanish Cup Final. Iniesta, for example, will experience for the first time, this Wednesday, what it is like to play in the Cup Final. 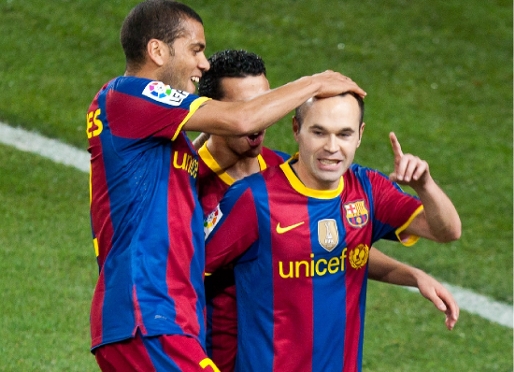 Although the 2008 Final against Athletic Bilbao (4-1) is fairly recent, and most members of the first team squad are practically the same, there are a number of FC Barcelona players who haven’t played in a Cup Final, a third of the squad. They are Iniesta, Maxwell, Jeffren, Fontŕs, Valdés and two of this season’s signings, Mascherano and Afellay.

Ten players can repeat the experience 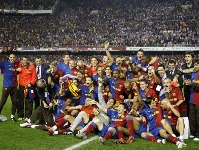 Ten players in the current squad were involved in the final two years ago. They are Pinto, Alves, Piqué, Puyol, Sergio, Xavi, Keita, Messi, Bojan and Pedro, who only played the final few minutes of the match. They're the only ones who savoured the triumph on the pitch in Valencia. Valdés was on the bench and Iniesta, Milito and Abidal missed the Final through injury. Abidal will also miss this year’s Final..

Iniesta's case is especially painful, because an untimely muscle injury to his right thigh during the final minutes of the Barcelona-Villarreal match (3-3) prevented him from playing, three days later, the 2008 Cup Final. Andrés reappeared, however, in the Rome final against Manchester United. Iniesta also was unable to take part in the World Club Championship Final in 2009 due to injury sustained in the semifinal.

Villa and Adriano, champions with other teams

None of this season’s signings (Mascherano, Adriano, Villa and Afellay) nor last season’s signing (Maxwell) have played a Cup Final in a Barcelona shirt. Adriano and Villa, however, have played in finals with their previous clubs. In addition, they’ve both won all the finals they played in. Adriano was on the winning side in 2007 and 2010, at the Camp Nou, with Sevilla, while Villa lifted the Cup in 2004 (with Zaragoza) and 2008 (with Valencia). It’s a similar story with Milito, injured in 2008 but won the 2004 final with Zaragoza.