Puyol: "A final is always different"

Carles Puyol, who played a match again after almost two and a half months injured, believes the trajectories and precedents of Barēa and Madrid will have no influence on how the Spanish Cup Final will go on Wednesday. 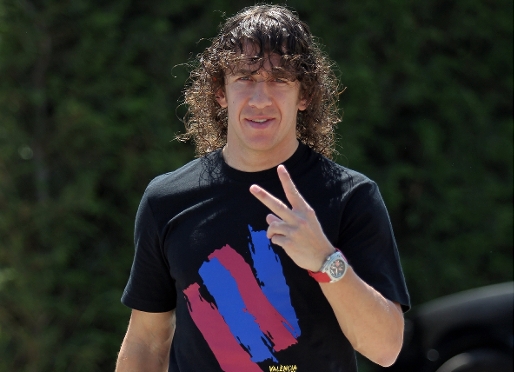 With the Cup Final shirt

Carles Puyol came into the newsroom wearing the shirt that Nike and FC Barcelona have brought out for the Cup Final in Valencia, where on the back it reads, "We are the colours. We are our ways”.

The presence of the captain Carles Puyol, on Saturday, in the starting line-up, was a big surprise. A pleasant surprise, although in the 58th minute he had to leave the pitch injured. Puyol hadn’t played a game since the 22nd of January, against Racing Santander, two and a half months that seemed like an eternity to the player. This Sunday, around mid-day, Carles Puyol spoke about his recovery, the league game against Madrid, and the Spanish Cup Final next Wednesday, at a press conference at the Joan Gamper training ground.

The duels with Madrid are "a challenge" 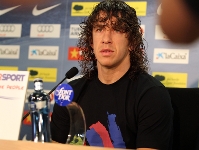 The four games against Real Madrid appear to be the main focus in the Barēa camp these last few days. Puyol acknowledges that games against Mourinho's team “are a real challenge because they are games against our biggest rival". Given that, the captain stated that the team is "really looking forward to it all".

However, Puyol, who has already spent 12 years in Barēa’s first team and knows all about clashes with Real Madrid, believes that you shouldn’t look at the recent games with Madrid to analyse the Cup Final on Wednesday, "A final is always different.......it has nothing to do with previous games or either club’s current trajectory”, he said.

The League title is "a bit closer" 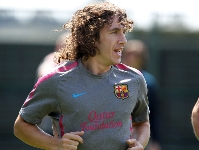 As for Saturday's game against Real Madrid and the 8 point lead that Barēa still maintain, Puyol says that "the title is a bit closer, . but we mustn’t be overconfident”. Although he thinks the team could have got a better result on Saturday, the captain said "the general feeling is that we played a god game".

As far as Mourinho’s game plan went, Puyol said that "everybody plays as they see fit and use the weapons they have". However, Puyol talked about the matches to come, saying "we have a philosophy, a way of playing, and we’ll respect that to the end”. 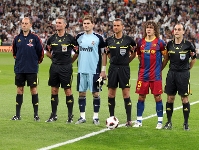 On his return to the team after injury Puyol stated that "I felt very good, with loads of enthusiasm and excitement. It’s been three hard months that were very tough for me". Despite having hamstring problems during the game, and having to leave the field early, the captain explained that "it was the perfect place to make my comeback. In the first half I felt really good until I started having some problems”. He denied that the hamstring strain on his left thigh was due to perhaps coming back too early: "We made the decision and it was the right one”.

In terms of whether he’ll be Ok for the Cup Final, Puyol is not sure if he’ll play, but "I’ll definitely be there, playing or not, I don’t know”.

Puyol talked about the last few months of recovery when he didn’t know when he might be able to return to the first team."Every day I kept trying. There were days when it all went well and others where we went back to the beginning. That was the hardest part” he said, but he’s confident he won’t have a recurrence of the injury.