By far the two strongest teams of the 2010/11 league season are about to meet at the Santiago Bernabéu, and here we look at some of the stats relating to the game. 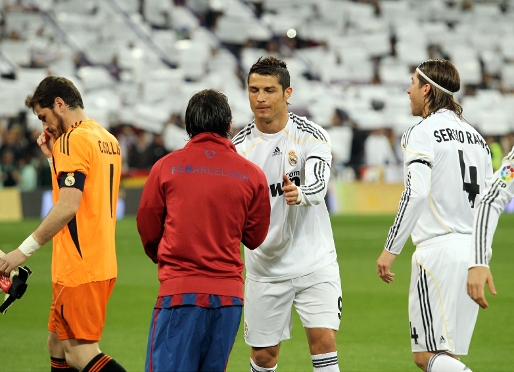 ►  Best home team against best visitor → Barēa have not lost a league game away from the Camp Nou this season (13 wins and 2 draws). But Guardiola’s side will be facing a Real Madrid that had won every home game until their unexpected reverse against Sporting a fortnight ago.

► Passing versus counter attack → Barēa have an average 73% possession compared to 59% for Madrid. The Catalans make 791 good passes a game, while the all-whites make 559. Mourinho’s side is the leader in counter attacks though, with 16 goals scored that way compared to 9 for FCB.

► The 15 minutes → Madrid is the most dangerous team in the first quarter of an hour, with 11 goals in that time-span. But they’ll be facing Barēa, the only team in the league that hasn’t conceded a single goal in the first 15 minutes.

► Since the 5-0 → Both teams have similar records since Barcelona thumped Madrid 5-0 earlier this season. In 18 matches, Barēa have won 16 games and drawn 2, while Madrid have won 14 games, drawn 2 and lost 2.

► Barēa more effective shooters → Barēa, have scored 85 league goals from 503 attempts. Real Madrid have had more shots on goal, 596, but the comeback has been less impressive, 72 goals.

► Strong defence → Barēa keepers Valdés and Pinto have only picked the ball out of the back of the net 16 times in 31 games, while Casillas and Adįn of Madrid have been beaten 22 times. Barēa have an excellent defensive record, and have only allowed 85 shots on goal, and have only committed 320 fouls. Madrid have received 91 goal attempts and made 425 fouls.

► Messi versus Cristiano → Messi has scored 34.1% of Barēa’s league goals, and Cristiano has scored 38.9% of his team’s. The Argentinian gets very involved, with 21.2% goal assists, more than twice the Portuguese player’s tally of 9.7%.