Evaristo: “Barça have a huge advantage”

Evaristo: “Barça have a huge advantage”

A club legend from five decades ago, who later played for three seasons at Madrid, Evaristo feels Barça are the favourites for the clásicos ahead. 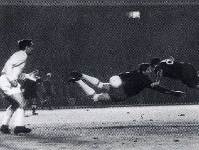 He scored one of the most important Barça goals ever. On November 23, 1960, Evaristo de Macedo (Rio de Janeiro, 1933) put the club into the European Cup quarter finals for the first time ever, and knocked Madrid and Di Stéfano out of the competition for the first time.

He was one of the stars of the FCB team of the era, playing alongside the likes of Kubala, Suárez, Kocsis and Czibor (1957-62). A natural goalscorer, he was on target 176 times in 226 games. But then he left the Camp Nou to play for the eternal enemy (1962-65), before retiring to Brazil. But he has never stopped following the Spanish league and spoke to www.fcbarcelona.cat about the forthcoming matches between his two former clubs.

-What news has reached Brazil about the four clásicos?
“I watch all the Spanish league matches and I think Barça have a huge advantage because they have been playing together for so long. They are better prepared. Madrid, have some great individuals but aren’t so good as a group. The difference between one team and the other is playing collectively”.

- Who do you think is in the best form coming into this decisive stage of the season?
“Barça are the favourites right now. They’re better, they have shown that all year in the league, where consistency counts”.

- Do you think the fact that Barça have won the last five meetings will have an effect on these games?
“Sure. Madrid think about that a lot. When I was a player, if you played a team with a winning dynamic there was always that fear that the same thing would happen. But I have to say that Madrid look like a team with a lot of character”.

- They say Barça and Madrid have opposing styles. Which do you prefer?
“I much prefer the way Barça play. There is so much movement in each action and their players have a lot of skill”.

- Do you think a priority should be made of any of these games?
“I don’t think so. Any Barça v Madrid is important. But I think Barça can afford to relax in the league. There’s no problem there. But it won’t be like that in the Copa del Rey or Champions League”.

- So you think Barcelona have won the league?
“Saturday’s game isn’t fundamentally important. Barça are several points ahead. Whatever happens at the Bernabéu, I’d still say Barça will win the league. It’s hard to see them losing and it’s all in their own hands”.

- Then there’s the cup final…
“That something altogether different. It’s a one-off game, it’s all or nothing. It depends on how inspired the players are. It’s hard to predict”.

- And to finish, the Champions League semi finals.
“The European Cup will be different to the other competitions, because it’ll be home and away. For example, if you start away, you can take a more defensive approach to get a decent result. But Barça always play to attack. They don’t know how to play defensively”.

- You know better than anyone what playing Real Madrid in Europe is all about. Do you see any similarities between this team and yours in 1960?
“All teams were more evenly matched back then, although Madrid were a notch above the rest because they’d won so many titles and were the favourites. We managed to beat them and had some very difficult games on the road to Berne”.

- And if there was an epic ending for Barça which player do you think would score a goal like Evaristo’s?
I’m not sure. When I watch Barça, I don’t think they play with an out and out striker, who is there to convert crosses. But whoever scores, I’m sure he’ll make the fans very happy indeed”.