The run of Barēa-Madrid games coming up, is not the 1st time the two have met 4 times in quick succession, but we have to go back 95 years, to the 1915/16 season and the Spanish Championship when the 2 met in the semi to find a similar series of game 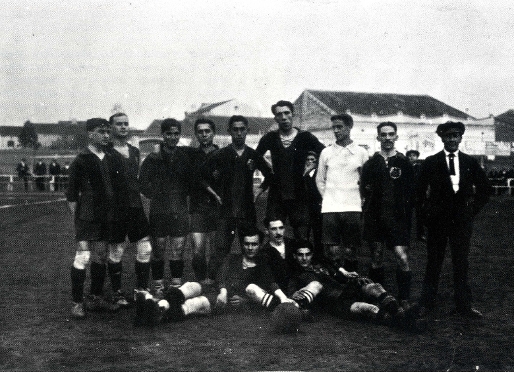 The games in 1916 finished controversially with some hotly argued over refereeing that laid down the foundations for the fierce rivalry between the teams since then.

Barēa had won the right to participate in the Spanish Championship by means of their taking the Catalan Championship, winning every game in a competition they dominated from start to finish. The regular starting line up included keeper Lluķs Bru, midfielder Ramon Torralba and the strikers Vicenē Martķnez (32 goals in 29 games in the 1915/16 season) and Paulino Alcįntara (33 goals en 24 matches).

The Madrid side had won the Central Championship and the most famous name in their team was the striker Santiago Bernabéu, who went on to be President at the club between 1943 and his death in 1978. 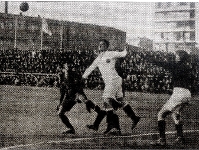 Barēa and Madrid FC went straight into the semi finals and the first leg was played on March 26th 1916 at the ground in Carrer Muntaner, which was actually Espanyol’s ground. Barēa won 2-1 (with goals from Alcįntara and Martķnez) in a game which saw some rough play that resulted in Barēa’s Baonza getting injured, though he stayed on, as there were no subs allowed in those days.

In the return game on April 2nd (at the O’Donnell ground of Atletico Madrid), Barēa faced a hostile crowd and were forced to start the game with just 9 men, as the train carrying Santiago Massana and Vinyals was held up. Eventually, Costa came on after 15 minutes and Fransesc Bru made it 11 players when he was brought on on the half hour. Madrid were in control though, and although Martinez opened the scoring for Barēa, 3 goals from Bernabeu and a fourth from Jean Petit gave Madrid a 4-1 win. Since goal difference was not considered at that time, the result meant that a third play off game was required to settle the matter.

The third game was also held on April 13th at the O’Donnell pitch and was refereed by ex-Madrid player and club member José Įngel Berraondo. This was an epic game, with both teams alternating the lead. It was 2-2 at half time, 4-4 after 90 minutes and ended 6-6 after extra time. Barēa’s goals came from Alcįntara (3), Mallorquķ, Bau and Martķnez. Madrid had three penalties, but Bernabeu could only score one, with Bru saving one of the others with his head! The Barēa players complained bitterly about one of the Madrid goals which came after the Madrid striker Belaunde had fouled Bru, but the result stood and a fourth game was now arranged.

Barēa walk off before final whistle

On 15th April, again at the O’Donnel pitch, the fourth and decisive game was held, with Berraondo, who this time was to play an unfortunate, but vital role, again in charge. Barēa went ahead through Martinez, only for Bernabeu, in a clearly offside position, to draw Madrid level. Martinez got his second before the break to again put Barēa ahead and soon after, Alcįntara had a goal disallowed for offside. On 85 minutes, Madrid drew level once more, then Vinyals saw an effort hit the post. Finally, with hardly any time left on the clock the ref gave a penalty to Madrid for a very dubious handball against Reguera, but Bru was again the team’s saviour, saving his third from five penalties over the four games.

Unfortunately, extra time proved decisive as Sotero Aranguren made it 3-2 from a massively offside position and then got the fourth whilst a Madrid player held keeper Bru back. This proved too much for the Barēa team and on 108 minutes, their captain Santiago Massana led them from the field, unwilling to play any further under such a biased referee. The Madrid crowd, curiously enough, seemed to understand the gesture and the reasons for the team refusing to finish the game. The following day, the players were greeted by a large crowd at the Passeig de Gracia station, who considered them the clear moral victors.

In the resulting final, played at the Muntaner ground on May 7th 1916 Madrid met Athletic Bilbao and with a crowd clearly behind the Basques, Madrid went down 4-0.