“Anything can happen in football”

Guardiola warns “anything can happen in football”

Guardiola continues to preach caution: “in football and in sport as a whole, anything can happen”, whilst stressing the importance of Tuesday’s game :”we are on the verge of reaching the semis for the fourth year on the run”. 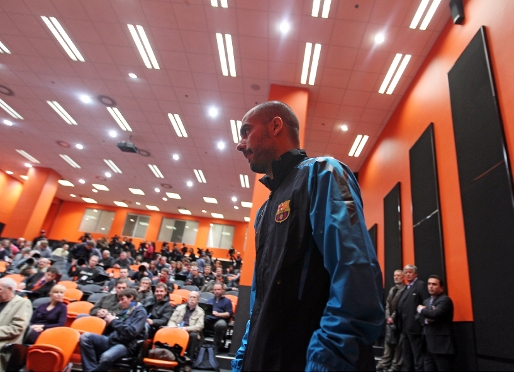 Keita: “We have to come out strong”

Seydou Keita faced the media before Guardiola and he explained: “we don’t need any special motivation for this game, we are playing for a semi final place in the Champions League. All we have to do is to remember how Shakhtar played in the first quarter of an hour in Barcelona. If we don’t come out strong and focussed the n we could find ourselves in a similar situation as we did in Seville against Betis”.

The Mali international insisted that Shakhtar were a big threat: “I know they lost on Saturday, but this is a strong team who will fight to continue in the competition till the last minute. It won’t be an easy game for either team, but what happens here could be useful to us in the next few games”.

As with Guardiola, Keita refused to be drawn on the prospect of a semi final against Madrid, commenting:”we’ll have time to think about the next round. It’s no problem for me to put Madrid out of my mind - our only objective right now is to reach the semi finals”.


Guardiola was very cautious ahead of the first leg and he repeated his respect for Shaktar on Monday, reminding reporters: “there’s still 90 minutes to go and we will be playing in an immense stadium with a big atmosphere”.

Going out for a win

With the Madrid games coming up, the boss again insisted on the need for his players: “to focus on the game in hand. Since we’ve been together we have always taken every game seriously and not looked ahead to the next one. Our idea against Shakhtar is to go out and win the game, scoring one or two goals. That’s the idea we always have and we will stick with it”.

No intention of resting players

Guardiola will wait until match day to assess the state of his players’ fitness, explaining: “we’ll have to see how we find them, bearing in mind we’ve just come off a tough game against Almeria and made the long trip over here” However, he made it clear he wouldn’t be resting any players with an eye to the upcoming games: “reserving players now? We are playing for a spot in the Champions League semi finals and we have to come out strong here. Tomorrow we’ll see how the players are in terms of fitness, that’s all”. Asked as to whether Messi would start, Guardiola repeated: “we will see how he is tomorrow and make a decision then”. 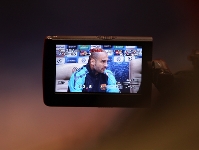 “I don’t think the fans are thinking about the treble”

The boss was also asked if the fans could start to turn their thoughts to another treble winning end to the season and he was adamant: “I don’t think the fans are thinking about winning the treble. There’s still a lot to play for. The most important thing and what really makes me proud is that after three years together we are coming to the end of the season with all of our options intact”.