Stats from a vital match

Stats from a vital match

FC Barcelona beat Almeria 3-1 to consolidate their 8 point lead at the top of the league. Following are the stats from this crucial game. 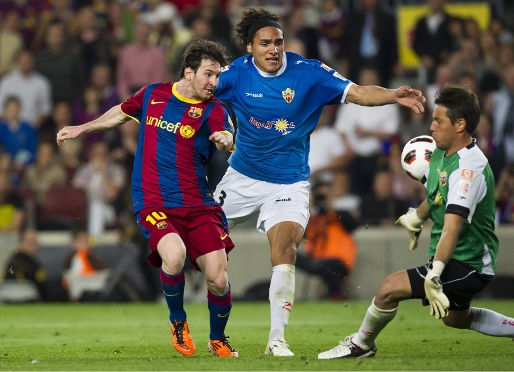 - Barēa has gone 29 games unbeaten in the league. They haven’t lost since September 11th and they are 3 games away from the historical record of Reial Sociedad 79/80.

- With his 2 goals against Almeria, Leo Messi reached the total of 47 goals this season and equals his personal best (last season).

- Messi scored the 3rd penalty awarded to Barēa in the League. The other two were away at Osasuna (0-3) and home to Racing Santander (3-0).

- Javier Mascherano received his fifth yellow card of the season and will miss the next league match, away to Real Madrid.

- Thiago Alcantara scored his second goal of the season, the first was also against Almeria, in the Spanish Cup.

- In the 4 matches between Barēa and Almeria this season the total score has been 19-1.

- Alves was the player who recovered most balls (14).