Pinto happy: “I lasted the game and we won”

Pinto happy: “I lasted the game and we won”

Keeper José Manuel Pinto, who was doubtful until the last moment, explained: “I felt fine – now we are focussing on the Shaktar game, It won’t be easy”. 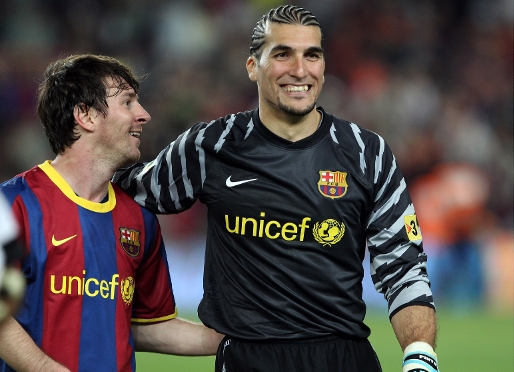 Back in training on Sunday

The squad will be back in training on Sunday morning, with the session at the Ciutat Esportiva Joan Gamper behind closed doors at 11.00. Pedro will hold a press conference afterwards.

Pinto’s ankle injury had threatened to keep him out of a game for which with Valdés suspended, he was pencilled in as first choice keeper: “I had three hard days working to be okay to help the team. Maybe when my ankle stiffens up I’ll have a bad night with it tonight. I won’t get much sleep, but the important thing was that I lasted the whole game and the team won”.

“A lot of points left”

Pinto wasn’t surprised by the fierce resistance bottom club Almeria showed: “nobody makes it easy for us and Almeria had some speedy forwards out there” As to next week’s game in the Bernabeu, the keeper insisted: “there are a lot of points left and we have to take it one game at a time –we are happy with the difference in points over Madrid, but all the games that are left are important”.

Before they face Madrid, the team have their UCL quarter final second leg against Shaktar to play and Pinto warned: “it won’t be easy in Ukraine –don’t forget what happened in the second leg against Betis. We have to be well prepared for the game because it is a difficult ground to go to and we have to go into it with our usual desire”.

Below are some of the other players’ post match comments:

“It’s tough at this stage of the season because every team is fighting for something. Almeria made it hard for us, but we stayed calm, particularly when they went ahead”.

“We are still eight points up on Madrid. It’s important that we keep on winning, each time there’s one less match to play. That’s what will keep us going till the end of the season”. 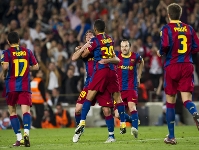 “They were very quick, but we are always prepared to make sacrifices for the team and fight for the three points”

“It’s a very big lead, but we just have to keep on getting the maximum points possible –starting at Madrid”.

“I came through okay, it’s good to come back and not to feel any twinges”.

“We feel really bad for Bojan. Let’s hope he’s back as soon as possible”.

“It was very tough game -just as I think all the games we have left will now be”.

“When you go behind, everything is harder, but we kept going till the end of the game and got our rewards. We completed our objective”.

“Eight points is a good distance, but first we will focus on the Champions League game and then look to go and win at the Bernabeu”.