Eight games. Twenty four points. Forty two days. That’s all the La Liga teams have left to ensure a Champions League spot, get into the Europa League, or just survive. 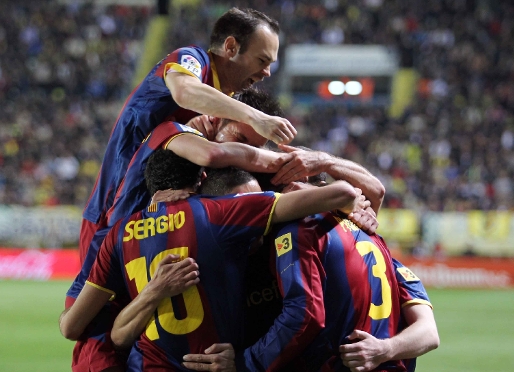 Do or Die for Malaga and Zaragoza

Desperately in need of a win, second from bottom Malaga host Deportivo, who are five points ahead of them on Sunday, whilst Zaragoza, just a point above Malaga could plunge Getafe, who are level on points with Deportivo, deeper into the relegation mire if they can win at the Romareda on Monday night. Getafe have won just one league game in 2011 and have only three home games left to play with trips to Mallorca, Villarreal, Real Madrid and a possible last day crunch game against Real Sociedad in Donosti.

The final run in that starts this weekend promises plenty of excitement right up to the last weekend in May.

Whilst Barça will be looking to at least maintain their eight point lead at the top, third and fourth placed Valencia and Villarreal will be meeting at the Mestalla, Real Madrid face a tough trip to Bilbao, Seville and Espanyol travel to Mallorca and Hercules and Atletico Madrid have a chance to scramble back into the UEFA spots when they play Real Sociedad at the Vicente Calderon. At the other end of the table, Malaga are at home to Deportivo and Zaragoza host Getafe on Monday night.

Llorente the big threat to Madrid

There’s been plenty of speculation that Bilbao’s leading scorer Fernando Llorente could be wearing the white of Real Madrid next season, but on Saturday he will again be leading the line for the Basques against a team he’s managed to score against in the last three games between the two. Madrid will be without Benzama and Kedira, but Cristiano Ronaldo and Marcello both make the trip.

A win for Bilbao could take them to within 6 points of Villarreal, who play Valencia on Sunday. Juan Carlos Garrido’s team put in a great midweek performance to virtually ensure a Europa League semi final spot and they make the short trip to Valencia on Sunday on a high, knowing that a win against Emery’s team would give them back the third spot in La Liga. It’s the fourth meeting between the two this season, with two draws and a win for Villarreal so far and as Valencia boss Unai Emery says: “we’ve not won in our last three at home and we need the fans behind us on Sunday”.

Manzano back in Mallorca

Bilbao lead the chase for the Europa League places, but Seville are only behind on goal difference and go into the game in Mallorca on the back of a run of just one defeat in their last seven games. Kanoute and Navas both miss the trip and Laudrup will be looking to beat one of predecessors, Gregorio Manzano to ensure a nerve free finish to the season. Espanyol are two points behind Seville and this week suffered yet another injury blow with ex-Barça man Sergio Garcia ruled out for the rest of the season.

Pochettino’s team travel to Hercules, who will be hoping to build on last week’s great win in Donosti to lift themselves out of the bottom three. Atletico Madrid meanwhile, have quietly clambered their way back into the European reckoning and ahead of the meeting between the two in Cornella next weekend, they could overtake Espanyol if they lose in Alicante and Real Sociedad go down at the Vicente Calderon.

Sporting and Osasuna will be after a win to ensure mid table comfort when they meet at El Molinon and Racing and Llevant are in a similar position for their game at El Sardinero. With a run in that includes games against five of the top six, Osasuna are sitting six points ahead of the drop zone and have to get a result in Gijon, whilst their hosts are level on points, but with a much easier looking end to the campaign, playing five of the teams below them. Racing are a point above Osasuna and Sporting and on the back of two wins on the run, they will look to upset the in-form Llevant and with five of their last eight games at home they must fancy their chances of staying up.