"We can’t afford to drop points against Almeria"

Guardiola: "We can’t afford to drop points against Almeria"

Once again, Josep Guardiola tried to curb overconfidence before the home game against Almeria. Football is full of surprises and Sporting Gijon and Schalke 04 are clear examples. It will be a game where we won’t let the 3 points escape. 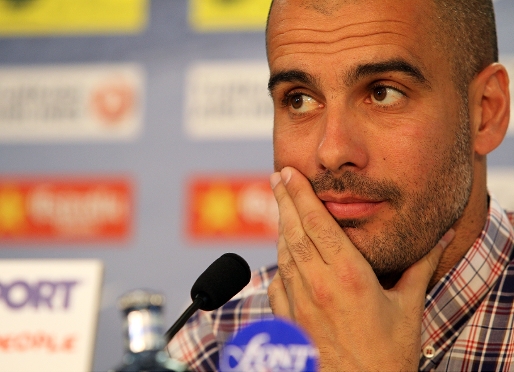 Praise for Barça B

In response to a question about the fine performances of the Barça B team, which plays tonight against Granada in the Mini Estadi, Guardiola spared no praise for Luis Enrique’s side: "What he's doing is amazing, unimaginable. They’re battling to be the best reserve side in the history of the Second Division, and are doing it playing great football, and I’m constantly taking players for the first team. It’s admirable and I want to congratulate them. The club is very proud of them".
"The League is the most important competition of the season. The Champions League is more glamorous but the competition that decides the best team of the year is the League”. Josep Guardiola’s words. The Barça manager asked for the greatest respect to be paid to Almeria, before the match that he qualified as fundamental: "I ask everyone to help us, and that the fans turn up at the Camp Nou. It’s a vital game. We mustn’t drop any points against Almeria”.

Guardiola knows how teams at the bottom of the table can make Barça suffer. Almeria visit the Camp Nou playing for survival, and with a new coach which will be extra motivation for the players. "Teams like this have everything to play for in every match from now. Last year we had lots of problems with Tenerife and Xerez at home, and I haven’t seen any games under the new coach and have no idea what his tactics will be". 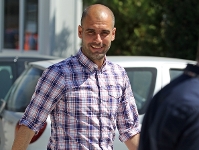 The recent victories by Sporting Gijon in Madrid, and Schalke 04 at Inter Milan reaffirm Guardiola’s thinking: "Everyone wanted Schalke 04 in the quarter-finals of the Champions League and look what happened against Inter. Nobody thought that Sporting would come away with anything at Real Madrid and they won 1-0.I’d rather be prudent than come up short".

Pinto and the missing players

With Valdés suspended, Guardiola is waiting on Pinto’s fitness. He’s improving but is still doubtful: "Today he’s better than yesterday. Tomorrow we’ll give him one last test and if he’s okay he’ll play, if not one of two goalkeepers from the reserves will play".

As far as the absence of Puyol and Abidal are concerned, and their effect on the team's defense, Guardiola didn’t want to dramatise the situation. "We’ll deal with it. Against Barça every team looks to find the spaces in our defense, and not just because Shakhtar did it do we have to take extra precautions. To avoid problems we have to attack better and lose fewer balls. It’s nothing new. We’ve been playing like this for 3 years". 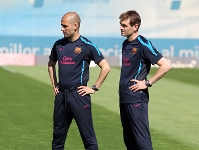 On the physical state of the Barça captain, Guardiola asked for patience: "He’s taking two steps forward and one back, and now he’s the same as a few days ago. It's a complicated injury that requires patience”.

It’s not the time to think about Real Madrid

Given the importance of the next two games against Almeria and Shakhtar, Guardiola refused to dwell on his answers to the numerous questions about the two matches against Real Madrid and even less, about the hypothetical Champions League semi-final matches.

The Barcelona manager wished to warn about the danger of overplaying the situation too much ahead of the Spanish Cup Final: "If you want to portray me as a mood cooler I really don’t mind. We have to be aware that in Valencia there will be 20,000 fans of two teams who are historic rivals. We’re all responsible for what might happen, myself as the manager and my players. I want them to show the utmost respect for the opponent and do it quietly. Since I’ve been the manager they’ve shown total respect towards our opponents and especially towards Real Madrid".