Barça have had their second to last training session before their Champions league quarter final with Shakhtar. Pedro and Maxwell are among the 10 players shortlisted. 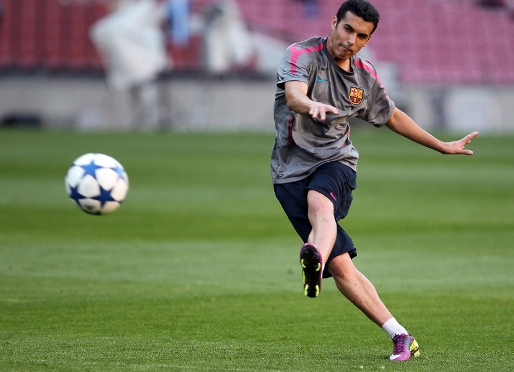 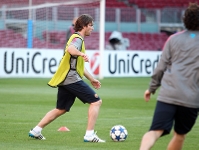 The whole of the Barça first team were at training in some way or other today, and the great news is that both Maxwell and Pedro, who trained on Monday, have been given the medical all-clear and are available for selection for Wednesday’s game at the Camp Nou. Maxwell had a nasty groin strain and Pedro had pubis trouble, but all that is now in the past. 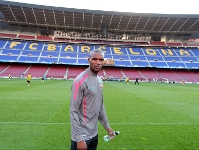 Carles Puyol is still working in isolation as he battles with injury. Abidal, who yesterday got to wear his kit and make his first contact with the Ciutat Esportiva pitch since his operation, watched the session from the bench.

The players took to the field just after 18.00 at the Camp Nou for the usual warm up drills. Josep Guardiola, who spoke to the media before rather than after the session, was a few minutes late because the press conference overran a little.

24 players on the pitch 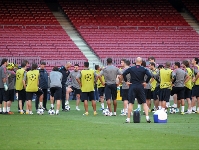 The 20 members of the first team were joined by Fontŕs and the three B team players picked by Guardiola for Barça’s league fixture last Saturday in Villarreal, namely Montoya, Thiago and Jonathan Dos Santos.

At 20.15 the players and coaching staff left the Camp Nou for Hotel La Florida, where they will stay the night and much of Tuesday. They will leave their hotel tomorrow to go to the Stadium, as usual on match days at home, for the final training session at 12.00 and behind closed doors.

Oliveiro Jesús Álvarez González, better known as Oli, and who played for Oviedo, Betis and Cadiz, watched the session from the terraces along with Juan Carlos Carlos Unzué, the former Barça goalkeeping coach who is now manager of Numancia.