The squad were back in training this morning, with Maxwell and Pedro joining the main group, whilst Puyol again trained apart and Abidal got changed and walked around the training pitch. 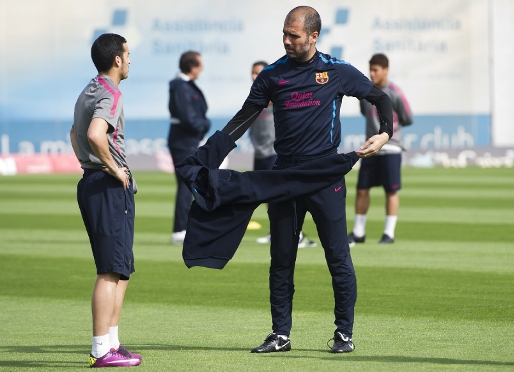 More info
After a well earned rest day yesterday following the win over Villarreal , the team were back in training this morning with their focus very much fixed on the Champions League quarter final first leg tie against Shaktar on Wednesday, Today’s was the first of three sessions the squad will have before the game. 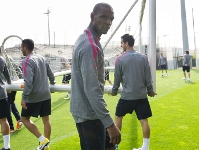 The session saw the return of Maxwell and Pedro, who both missed the trip to Villarreal, as well as Puyol, who again worked apart with physios Paco Seirul•lo and Lorenzo Buenaventura.

Another welcome return was made by Abidal, who visited his teammates on Friday for the first time since his operation and who today put on his track suit to stroll around the pitch.

Only Leo Messi was not to be seen on the training pitch, as the Argentinean stayed in the changing rooms for some specific recovery work. 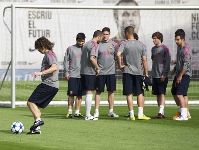 As well as the 20 first team squad players, Guardiola also called up nine B team members - Armando, Sergi Roberto, Planas, Tello, Saúl, Mińo and the three who made the squad for Villarreal, Thiago, Jonathan dos Santos and Montoya.

The session, which was held with the Champions League ball in preparation for Wednesday, started with a round of applause for Andres Iniesta, whose wife gave birth on Sunday.

The team will be back for their next session on Tuesday at 18.00 at the Nou Camp.