Facts and figures from the Villarreal game

The game started and ended on the same note, with Victor Valdés the Barça hero, after the team had dominated the middle part of the game. Below are some of the revealing facts and figures from the match: 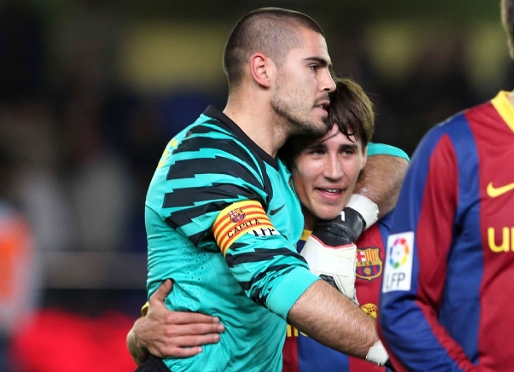 ► Valdés made just 3 saves in the 95 minutes of the Villarreal game, but all of them were excellent and vital stops. The first two came from Rossi and stopped Villarreal from opening the scoring, whilst the third was at the end of the game, when he kept Cazorla from equalising. Three decisive saves from one of the best Barça players on the night.

► One of the other good performances came from Sergio Busquets, who won most tackles(14), whilst Thiago made most passes (136) – no Villarreal player made more than 55.

► Thiago started his first league game of the season, having been in the starting line up for the two Cup wins against Ceuta (0-2 and 5-1), against Rubin Kazan (2-0) and in the 0-3 win over Almeria in the Cup, when he scored.

► Jonathan dos Santos also made his first appearance in the league this season, coming on for the last 10 minutes. The youngster has already featured in the Spanish Super Cup, Champions League and Spanish Cup this year.

► Iniesta continues to serve the team and is the only player to have figured in all the team’s 30 league games -29 of them as a starter.

► Valdés and Sergio Busquets both saw their fifth yellow card and will miss Saturday’s game against Almeria. Mascherano and Messi are just one card each off suspension.

► Piqué scored his second league goal this season and his ninth in all for the Club(six in the league and three in Europe). His previous goal this campaign was in the 1-2 win over Atletico Madrid and that too came from a corner. All six of his league goals have come in away games.

► All four of this season’s signings - Adriano, Mascherano, Afellay and Villa started against Villarreal. The first time that has happened so far this campaign.